has been called the greatest thinker of our time.

He's also been called "alt-right" by the left.

Also fine (but probably not true)

His rise to fame:


Jordan B. Peterson is a psychology professor at the University of Toronto Canada. He teaches lessons on personality, and a class called Maps of Meaning, which explores man’s search for meaning throughout history. Peterson has also taught at Harvard University and works on improving methods of therapeutic counseling. Recently, Peterson has exploded in popularity. Peterson is both praised and hated across the United States and Canada for his campaign against political correctness. How did this come to be? How did Peterson go from an unknown professor to blowing up the internet? With every passing day, Peterson grows in popularity and influence on social media, university campuses and even in politics.

On Oct.11, 2016 Peterson led a protest at the university of Toronto against bill C-16, advocating for free speech. Bill C-16 made the criticism of gender identity illegal. This forced professors and students to acknowledge transgendered students with their correct pronouns. It also ended any criticism of genders advocated for by trans individuals and the communities on university campuses. Soon after the protest began, radical leftists began to swear and shout the word “shame” at Peterson and his supporters. Violence ensued, and police were called to the scene to stop what would soon become a riot at the hands of the radical left-wing students.  source

His newest book, 12 Rules for Life: An Antidote to Chaos, has shot to the top of Amazon's best seller list. I've heard rumors that his Patreon donation page is over 60K per month.

So this morning I decided to do more about finding out who this guy is and proceeded to spend several hours (actually over three) listening to his YouTube videos and interviews.

Aside from the fact that he's a psychologist, flaps his hands about incessantly, and generally meanders about in his speech - all things I detest, I found him to be completely predictable and not very deep.

I'm a sucker for self-help books hoping that the next one will solve the mysteries of life, so I really wanted to like this guy.  Instead, I am perplexed by his notoriety. 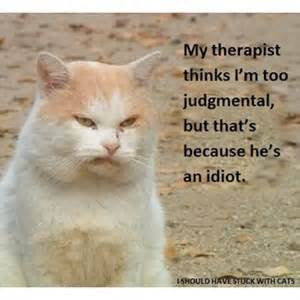 Every generation or so a few people come along to capture the imagination of unhappy people who wish to improve their lives.

If his rather pedestrian advice moves you to improve - well, that's super fine.

To save you the time of reading his book, here are his 12 rules:


Rule 1 Stand up straight with your shoulders back
Rule 2 Treat yourself like you would someone you are responsible for helping
Rule 3 Make friends with people who want the best for you
Rule 4 Compare yourself with who you were yesterday, not with who someone else is today
Rule 5 Do not let your children do anything that makes you dislike them
Rule 6 Set your house in perfect order before you criticize the world
Rule 7 Pursue what is meaningful (not what is expedient)
Rule 8 Tell the truth – or, at least, don’t lie
Rule 9 Assume that the person you are listening to might know something you don’t
Rule 10 Be precise in your speech
Rule 11 Do not bother children when they are skate-boarding
Rule 12 Pet a cat when you encounter one on the street

Amazon Deals in Toys and Games
If you're a Michael Connelly fan his new Harry Bosch novel is out:

Some cool deals in kitchen stuff

Email ThisBlogThis!Share to TwitterShare to FacebookShare to Pinterest
Labels: Jordan B. Peterson