you be the judge. 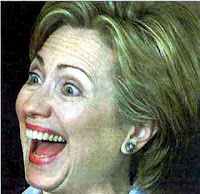 For years, I've remarked on her over enthusiastic manner of the wide eyed, open mouthed expression that seems to say, "Oh, wow - I'm so happy to see you."  It's often accompanied with a squeal of delight.  It's strange and unladylike.

Lately, Hillary has been caught on camera doing some very strange things.  At first I just thought it was another of her weird ways of interacting with people, but now I'm not so sure.

In the video below, Paul Joseph Watson is going to mention the possibility of her having a Jacksonian seizure.  Having never heard of this type of seizure, I looked it up:


Q: What is a “Jacksonian” seizure?

A. Jacksonian march, also called Jacksonian seizure, is one kind of a simple partial seizure. “Simple” in this context means patients do not lose awareness. Partial means that abnormal neuron firing only occurs in part of the brain, and, accordingly, abnormal movement or sensation is limited to only part of the body. The characteristic features of Jacksonian march are (1) it only occurs on one side of the body; (2) it progresses in a predictable pattern from twitching or a tingling sensation or weakness in a finger, a big toe or the corner of the mouth, then marches over a few seconds to the entire hand, foot or facial muscles.

Try and imagine this woman sitting in the oval office and then tell me all the reasons you won't for Trump.

And here she is reacting to a protester in Las Vegas just days ago.