Hillary Clinton freezes in fear over a heckler...

and people want to vote for her?

There is something seriously wrong with this woman.


THE FIGHT OR FLIGHT RESPONSE has got a new name. It's now called the fight, flight or freeze response. Stress experts around the world are adding the word freeze to the name in deference to the fact that instead of fighting or fleeing, sometimes we tend to freeze (like a deer in the headlights) in traumatic situations.

The fight or flight response (in its original form) is about survival. It's about hope. We activate it when we believe there's a chance we can outrun or outfight our attackers. The freeze response however, gets activated when's there's no hope.

[...]For human beings, the freeze response can occur when we're terrified and feel like there is no chance for our survival or no chance for escape. It happens in car accidents, to rape victims and to people who are robbed at gunpoint. Sometimes they pass out, freeze or mentally remove themselves from their bodies, and don't feel the pain of the attack, and sometimes have no (explicit) memory of it afterwards. source

Notice that the black guy (secret service agent?) has to reassure her that everything is okay and she should keep talking. Watch the video carefully in full screen and then watch it again.  This is not the response of a well person. She's surrounded by armed guards and yet the mere shouting of a few protesters is enough to render her almost catatonic.

The picture posted below that Dianny dug up, shows Hillary being helped up some steps by the same black man who comes to her rescue in the video. She's got a death grip on the arm of another agent, while her poodle Huma brings up the rear.

Does this obviously sick and very dangerous person belong in the White House?

The #nevertrumpers are going to help that scenario come to fruition.

Just say "no" to #nevertrump. 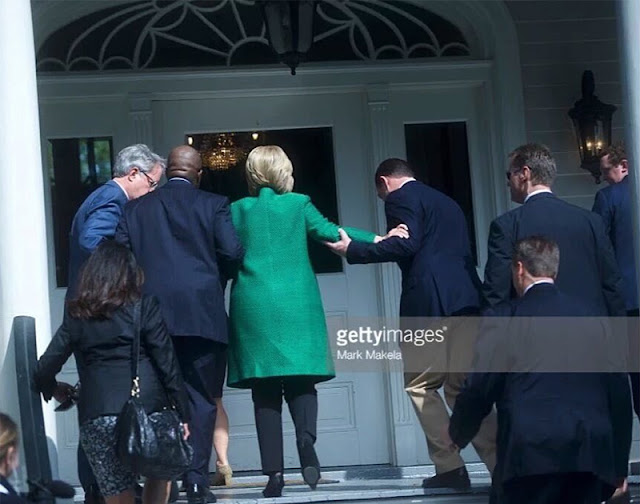