Lefty homosexuals are not about tolerance...

except when it comes to them.

No siree.  Not at all.  Take a look at a "couple" of loving, cute and cuddly homosexuals who were denied a wedding cake. 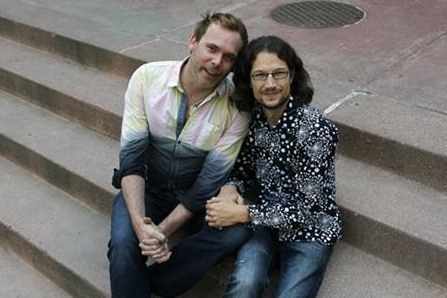 The one on the right, Dave Mullins, said, "I was angry and I felt dehumanized and mortified."  Over a wedding cake?

And guess what these cute and cuddly little lovers are going to do.

They are going to viciously destroy the baker who suggested they get their cake elsewhere.  He now not only faces huge fines, but could also be jailed.  Do they respect and honor the position of the baker?  Oh, hell no!

Let's face the facts.  A normal person would shrug and go buy their stupid fake "wedding" cake elsewhere.  But the cute and cuddly couple want to see the baker punished and destroyed.

Could a Christian Baker Who Refused to Make Wedding Cake for a Gay Couple Really Go to Jail?