To be fair, he's always been right way more than wrong, but I can't stand listening to him (makes me want a cough drop), and I always wonder why someone who pushes health supplements is so overweight.

However, the following video is mainly Mike Adams, The Health Ranger, who has a great voice and is easy on the eyes.

Alex and Mike are going to get into the "why" of this mess that's unfolding before our very eyes.  New York mayor de Blasio has just declared bars, restaurants, gyms, theater, and other entertainment verboten, for those who have not taken the jab. Do you really think places like San Francisco, Minneapolis, Chicago are not going to be doing the same??  What's next? No entry to grocery stores or pharmacies? Many of the colleges are requiring vaccines to attend classes. And numerous big corps are mandating their employees must take the jab.

This is exactly what the "fringe" doctors and virologists predicted would happen when the fake vaccine first hit the arms of the unsuspecting.

But first and much more important:

I read. I read a lot.  My idea of hell is a place with nothing to read.  I have many small books to read before Mass on Sunday. This past Sunday, it was a book about St. Michael the Archangel, originally published in 1962.

Lucifer has placed his stamp upon the present age. Open and secret revolt against God and His Church, the spirit of criticism, unbelief and immorality are spreading. The arrogant boast of Lucifer, "I will be like the Most High!" re-echoes everywhere. Puffed up with their discoveries and the progress in material science, men loudly proclaim their self-sufficiency and deny the existence of a Supreme Being. Governments and secret societies, plotting against God and striving to blot out from homes and schools, from offices and factories, all traces of Christianity, show plainly whose standard they follow. Never before in the world's history were God's rights so blasphemously mocked and denied, or the rights of man so arrogantly asserted, as they are today. 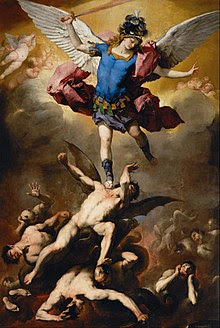 These frightful evils must convince us that we must turn to St. Michael, the Archangel, that glorious prince of Heaven who rendered all glory to God, conquering Lucifer and casting him into the abyss.

Already three centuries ago, St. Francis de Sales wrote: "Veneration of St. Michael is the great remedy against despising the rights of God, against insubordination, skepticism and infidelity" - vices which are perhaps more prevalent now than ever before.

Surely, it is time for Christians to "rise from sleep" and to offer vigorous resistance to the enemies of salvation. The weapons in this conflict are not the arms of civil warfare, but the spiritual weapons of prayer and penance, increased fidelity to the Commandments of God, and frequent reception of the Sacraments.  And surely we can choose no better leader in this conflict than the powerful captain who led the faithful Angels to victory.

Let us, then, with confident trust invoke the aid and protection of this mighty Archangel whose shield bears the inscription: MI-CHA-EL --- "Quis ut Deus" --- Who is like unto God?

As I'm working away on this post, mouth-breather Sean Hannity is playing in the background.  He actually has a couple of doctors on who are talking about ivermectin and hydroxychloroquine, and are saying "if you've had Wuflu do not get a vaccine." They both made it clear that none of their children would receive the "vaccine."   They stop short, however, of saying no one should get the death jab. Sean picks his guests carefully, or they're instructed to not "dump on the jab".

Take time to listen to Mike and Alex in the following video. After the video, I have enough links to keep you busy for the rest of the week.  It appears more people are starting to wake up.

Bayou Renaissance Man: "Vaccine hesitancy" - that gets it said!Uncanceled News:  Speculation… For Now: Emergency Plan of Prioritizing Vaccinated Patients Quietly Being Discussed at CDC
Natural News:  CDC now pushing for nationwide mandatory vaccine tracking database of all Americans, even after admitting the vaccine is failing
Vlad Tepes:  Dr. Hodkinson on the legal attacks on Peter McCullough for speaking out against the Vaxx/Covid narrative
Natural News:  It’s almost certain that Biden will announce nationwide “Delta” lockdowns this month as the White House remains clueless on how to halt the pandemic without destroying America’s economy
Ace of Spades HQ: New York City Imposes Mandatory Vaccinations and Vaccine Passports
Jonathan Turley: Professors: Going to Public Places Should be a “Privilege” Reserved for the Vaccinated
Zero Hedge:  Fired For Refusing COVID-19 Vaccine? You May Not Receive Unemployment Benefits
Natural News:  The coming Delta lockdown is DESIGNED to invoke nationwide protests so they can be exploited as a backdrop for false flag event to blame “anti-vaxxers”
Vaccines.news:  Pfizer Covid-19 vaccine “protection against virus” drops stunning 84% just four to six months after “fully vaccinated” SECOND DOSE of blood-clotting mRNA injection
Imperfect Foods
The peeps at Imperfect Food have put a --> direct link <-- with their offer of $20.00 off each of your first four orders.  If you decide to try them out, be sure and take advantage of the referral program yourself.
Two weeks ago, I ordered Imperfect Foods Almond Shower Oil and just ordered another bottle for hubby's shower. It's wonderful stuff! It's not just food at Imperfect Foods...
Posted by Adrienne at 12:30 AM