The debate to end all debates...

no, really - if last night was any indication of the possibility on any of them beating Trump in the upcoming election it went down in flames.

Since everyone on both sides of the aisle have picked apart everything that was said, I will instead focus on the visuals.  What they said is of no interest since not one of that nasty looking bunch could win against President Donald Trump (yes, Abigail - he is your president!)

Mini-Mike Bloomberg: Wouldn't you think that a man worth billions of dollars could afford a well tailored suit instead of the flopsicle he was wearing.  And, Mike, whatever you've had done to your face is not working - literally. The internet claims you're 5'8" tall.  No you're not.

Long Arm Warren:  Yeah, we get it, Liz, the all black pants and T-shirt with a brightly colored jacket is your "uniform." I know you think it makes you look hip and young and unconcerned about such things as dressing well, but it just makes you look lazy. And, Liz - the little ball earrings are soooo tacky and old. Your flailing arms, bobbing head, and scolding voice doesn't add to your appeal either.

Commie Sanders:  We were glad to see you took some effort to actually get a "sort of" haircut and attempt to tame the windswept look, but the suit, Bernie. Dear Lord in heaven - the rumpled unclean looking suit look is just so old folk home looking.  Might I suggest you wear a bib while dining?  And if you pop over to Amazon you can purchase a posture correcter that could be discreetly worn under that suit.  It's even on deal right now.

Sleazy Joe:  Another candidate who's had waaaay too much work done on his face.  I will give you an up-vote on your suit.  It appeared to fit.  You may want to drop the faux anger too.

Saint Pete of the butchered Bible verses:  Pete - trying to rock the day old beard look is a pathetic attempt to be edgy and with it. It didn't work.  Pete, Costco is selling Gillette Custom Plus3 Disposable Razors, 36-count for about $23.00 (on coupon.)  I suggest you get some.  And the suit?  Yeah, that's just what I want in a president - pegged pants legs and big clumpy shoes. Pete - you have a big butt (not going there) and pegged pants just makes it look even bigger.

Squatty Klobachur:  Okay - you're short. Not as short as I am so I do have some sympathy.  But when you're short and broad wearing a suit dress that could double as a box car is a very bad choice.  Next time try a skirt that flares at the bottom, a fitted jacket, a blouse with a V-neck, darker hose, and shoes with a bit more of slim appearance. And throw out the magenta lipstick post haste! 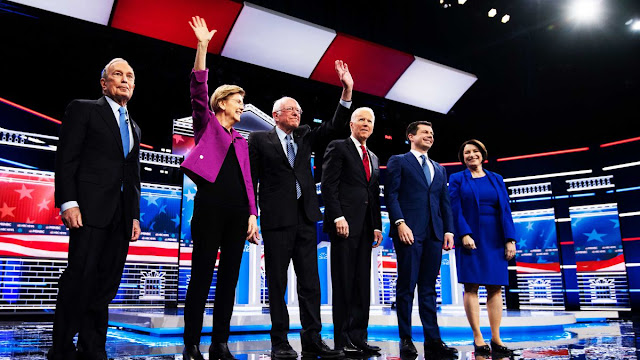 Can you imagine seeing any one of these messy unattractive people meeting with world leaders?  Yeah, me neither.

If they don't have the sense to hire a competent stylist to help them dress for success how are we supposed to trust them to run our country?

Last night I spent some time reading comments at Huff and Puff and the majority of them were anti-everyone.  Things are bad when you lose the most rabid of your commie/libtard followers.

Deals in Computers and Accessories

Ladies - this is a pretty cute travel dress for cheap.  I always check out the pictures posted in the comments and it looks nice on the very slender to the rather fluffy. It comes in a bunch of colors and patterns too.
Yes - I get a teeny kick back from Amazon if you use my links - at no additional cost to you.  Thank you...
Posted by Adrienne at 9:39 AM

If you're trying to lose pounds then you absolutely need to jump on this totally brand new custom keto meal plan.

To produce this keto diet service, certified nutritionists, fitness trainers, and professional cooks have joined together to provide keto meal plans that are powerful, painless, money-efficient, and satisfying.

Since their launch in 2019, 1000's of clients have already transformed their body and well-being with the benefits a professional keto meal plan can provide.

Speaking of benefits; clicking this link, you'll discover 8 scientifically-certified ones given by the keto meal plan.