Every year I wonder about the large number of children being raised without any acquaintance with God.  I witness parents who spend untold amount of time, effort, and money to ensure their children have the best education and wonderful experiences, but deny them any knowledge of God.

So when something like Christmas rolls around it's all about a family party and gifts and nothing to do with the birth of Jesus - our Lord and Savior.

Some of these parents could even be considered conservative, but most are not. Parents who were raised in a faith tradition and abandon it raise children who proceed to raise more children without faith. How do they explain the "christ" in Christmas or do they just call it a "holiday" tree and "holiday" gifts?

More important is how unprepared these children are for the real world.  Because there is no such thing as "your" truth and "my truth."

This morning's meditation for me was on Matthew 10:16-22 on advice given to the apostles by Christ as he sends them out to bring all nations to God:


[16] Behold I send you as sheep in the midst of wolves. Be ye therefore wise as serpents and simple as doves. [17] But beware of men. For they will deliver you up in councils, and they will scourge you in their synagogues. [18] And you shall be brought before governors, and before kings for my sake, for a testimony to them and to the Gentiles: [19] But when they shall deliver you up, take no thought how or what to speak: for it shall be given you in that hour what to speak. [20] For it is not you that speak, but the Spirit of your Father that speaketh in you.

It is also for most western churches the feast of St. Stephen - the first martyr for the faith.  Maybe these non-practicing people are thinking they're saving their children from the abuse that's heaped on Christians in today's upside down world.

And, trust me on this (said the spider to the fly) if you are a public and professed Christian the world hates you and will do anything in it's power to destroy you.

Just some musings on the second day of the twelve days of Christmas.

Other people are musing today too.

Notable among them are:

Hardnox over at Nox and Friends: Let’s Talk about Gun Death

Newsbusters: WORST OF THE DECADE: Trump Derangement Syndrome  a compilation of all the worst journalistic hate fests against Donald Trump and by extension all Trump supporters.

With that being said, Donald Trump has provided a website How to Win an Argument With Your Liberal Relatives, and it's great!

Even the kittehs are musing today. It's all about the cheez. A kitteh after my own cheez loving heart: 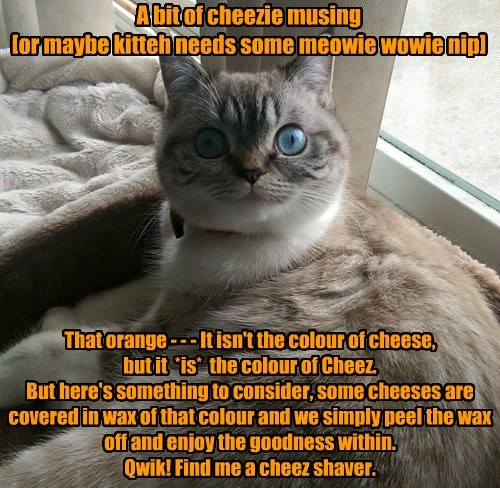 All sorts of cool end-of-year deals at Amazon so if you received some holiday cash you can spend it at Amazon.

Remember that yours truly receives a small commission when you purchase through my links at no additional cost to you - and I thank you.

Email ThisBlogThis!Share to TwitterShare to FacebookShare to Pinterest
Labels: Second day of Christmas