Is Virginia's attack on 2A the canary in the coal mine?...

Very little of Virginia Gov. Northam's attack on the 2nd amendment is being reported in the MSM. 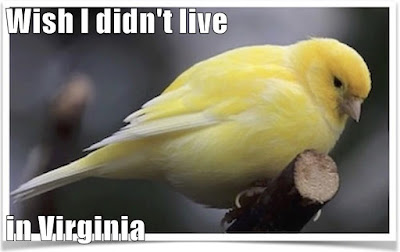 Northam wants to ban the sale of AR-15s and other long guns that are black and scary.  Out of the goodness of his rotten little heart, he's now saying that you may keep your scary gun if you already have such a thing lurking in your house.   But, but - you must register the scary gun.  You realize registration is the first step to confiscation. Yes?  It's exactly what Hitler did in the 1930's right before he confiscated all the guns. I think we all know how that turned out.

And what does Northam think about that?


"If we have constitutional laws on the books and law enforcement officers are not enforcing those laws on the books, then there are going to be consequences, but I'll cross that bridge if and when we get to it."

So it's okay to be a sanctuary city for illegal immigrants, emphasis on illegal, but it's not okay to protect and defend the constitution? Did I get that right?

Uriel, over at Nox and Friends, posted an excellent article Virginia – 2nd Amendment cause for concern and listed bills to be filed in many states after January 6th - all of which are cause for concern.

He also points out something I've brought up in the past which is the necessity of being aware of what's going on in your state (emphasis mine.)


"American Joe pointed out a significant problem that all states and all conservatives need to worry about. Democrat/Socialist/Progressive states are waiting like ravenous hyenas to see which way things go in Virginia. It will signal how they proceed and act or react.

Democrats will make sure that every state in which they are strong will follow their lead. It is up to the citizens of each state to decide but if they in fact follow the socialist path we are all going to taste a bitter pill.

...Every state has a list of bills and it is up to those within the state to pay attention. Conservative media can only do so much. It definitely appears that the most of the mainstream media has been bought off to slant the narrative. Internet may be the fastest, but it may end up being the least available, if the Democrat Left have their way." Read the rest - it's excellent!

So you see, my precious pumpkins, it is up to us.  We need to pay attention and do whatever we can to protect and defend the constitution of the United States of America - state by state.

NRA: Don't let Gov. Northam take away your rights and put your safety at risk.  Get the facts.

I receive a small commission when you purchase through my link - at no additional cost to you - and I thank you.