is opening on March 29th.

Tonight we'll be attending a pre-release screening organized by patriots and pro-life peeps in our town.

Abby Johnson is one of the youngest Planned Parenthood clinic directors in the United States. She has worked at a clinic in Texas for eight years, and has become a community outreach director and media spokeswoman for the organization, even winning the Planned Parenthood Employee of the Year Award. One day she is asked to assist in an ultrasound-guided abortion at thirteen weeks gestation. It is then that she witnesses a baby struggling for its life even as it is dismembered by an abortionist's tool. She resigns, becoming a anti-abortion activist, founding a ministry to assist former Planned Parenthood employees turned anti-abortion after their own experiences.

The film was shot on a budget of $6 million. Mike Lindell, the founder and owner of My Pillow, was a major backer of the film, contributing $1 million dollars to the production.Lindell has a cameo in the film.

Unplanned was given an R rating by the MPAA, who cited a few graphic abortion-related scenes as the reason for the rating and notified the producers of the film that the film would remain R-rated unless those scenes were removed, but denied that it had assigned the rating due to political bias. Pure Flix, which had been expecting a PG-13 rating, decided not to contest the MPAA's action due to concerns that such conflict may delay the film's release. However, regarding the MPAA's rating, co-directors Chuck Konzelman and Cary Solomon said that:
We consider the MPAA’s current standards to be deeply flawed, insofar as they allowed scenes of remarkably graphic sex, violence, degradation, murder and mayhem to have a PG-13 rating, whereas our film, highlighting the grave dangers of abortion in a straightforward manner, is considered dangerous for the American people to view.

If you have any doubt is pro-abortion (death) people are being strangled and their souls invaded by the Evil One, read a few of the comments from Youtube.  I don't have time to be "sanitizing" the bad words.  Youtube doesn't care and I think it's important to see the mind set of baby killers.

absolutely repulsive. This is all a bunch of bullshit, and the fetus isn't gonna fucking move ok? god you people are so fucking stupid. go take your dip and your "wholesome christian values" and shove them up your ass. the same people saying that you should give birth to it anyway and if you really don't want it to just give up for adoption are the same people who are against gay people adopting and all of you are fucking sickos. disgusting. I hope this video gets taken down.﻿

This is pure shit lol have fun watching a movie based on 0 facts and based on a woman who can hardly piece a sentence together.﻿

Amazing to read all the comments by these religious nutjobs ~ Not all pregnancies are planned - nor are they emotionally ready, financially stable ready nor even qualified to be a "parent" - Someone show me where it says directly in whatever Bible or Koran or text of your holy Doctrine where it specifically states that "Abortions" are a sin? You can't. and with the population count of close to 8 Billion people on this planet - our environment cannot handle the capacity; and you cry and sob over the thought of a fetus being removed during a clinical procedure, while doing nothing about the several hundreds of thousands of children who were already born, dying in unnecessary wars overseas. Where's the movie about that to shove in your faces? If you're so pro-life, then why aren't you practicing that in your daily lives to its full extent? - or is it only "human lives" that matter to you and your fictitious god?

This trailer is disgusting and demonizes a company that has help many women AND MEN over the years. I pray to god this movie dosent do well because its just capitalizing on today's political climate instead of just trying to make a good movie. I hope the creators burn in hell those pieces of actual human garbage﻿

Newsmax: 'Unplanned' Is a Must-See Movie 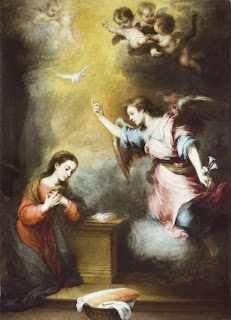 Today is the Feast of the Annunciation celebrating the coming of the Angel Gabriel to the Virgin Mary to announce to her the special mission God had chosen for her in being the mother of His only son.

And Mary said, "Behold the handmaid of the Lord; be it done unto me according to thy word."

What a perfect day to see a movie about the killing of babies.

Email ThisBlogThis!Share to TwitterShare to FacebookShare to Pinterest
Labels: Feast of the Annunciation, Unplanned movie