Is it becoming more clear how deranged the left is?...

this is not your garden variety deranged, but a full blown psychotic break with reality.

Imagine being such a nobody that no one hates you enough to send you threatening letters so you have to send them to yourself.  What's next Jussie, love letters?

And he gets to wander down to the station whenever it pleases him, while sexy Paul Manafort the Great is confronted with a swat team and dragged out of his house.

And guess what, my little cabbages?  According to many of the commenters on Huff and Puff, it's still all Trump's fault. (no link on purpose) 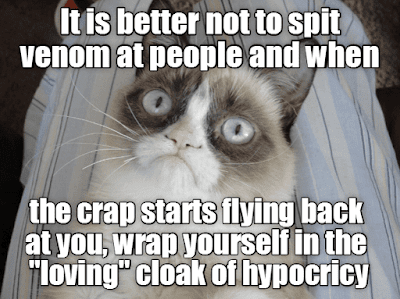 The arrogant z-list actress who landed herself a prince, joined George and Amal Cloony for a private jet trip to NY so she could have a "baby shower."  The Clooneys, along with Prince Harry, are huge supporters of global warming, and are always hectoring us on how we must change our life styles to save the earth.

Yeah - I'll get right on that; you pack of sniveling hypocritical, ignorant cretins.

Feel the Commie Bern Yet?

Are the Wheels About to Come Off in This Country?

I'm never been one to consider an uprising like the yellow vests attempting to burn down France as a possibility in the U.S.  Now I'm not so sure:

As my friend, LSP, says:


But seriously, imagine, for a moment, what things will look like here when the wheels go off.

Save up to 32% off on 6 Pack Wool Dryer Balls by Smart Sheep (I love mine and have been using mine since I purchased them in Oct, of 2014)