Megyn Kelly has been given a hard lesson in how the left operates...

do you think she learned anything?

Disclosure:  I'm not a Kelly fan and never have been.  I find her confrontational modus operandi to be off putting.

Having said that, I find what happened to her to actually be quite sad.  I don't think she's a racist (whatever the hell that is in today's world), and seeing the usual race baiters and hyper-sensitive grievance whores pushing each other out of the way to condemn her is typical of the commie/marxist/libtard way of operating.

Kelly spoke the truth about black-face:


But what is racist? Because you do get in trouble if you are a white person who puts blackface on Halloween, or a black person who puts on whiteface for Halloween. Back when I was a kid that was OK, as long as you were dressing up as, like a character."

She's not getting dumped upon for what she said.  She's being ousted because she made the fatal mistake of thinking she could hob-nob with the left and they wouldn't turn on her. 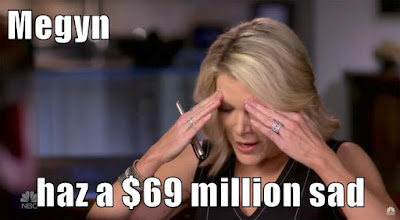 There is not one person reading this who hasn't at some time in their life thought they were top of the heap - the big kahuna, and that they were powerful and relevant only to find out they were a big-assed nothing.

What's sad is to have to learn this lesson in such a public way.

Deals in Toys and Games

Some cute stuff in Women's Fashion

I receive a small commission when you purchase through my links - at no additional cost to you.  I appreciate more than you could possibly know and I thank you.