Brett Kavanaugh did NOT refuse to shake Fred Guttenberg's hand...

but don't expect Google to tell you that.

Gun snatcher and Kavanaugh hater, Fred Guttenberg, staged an encounter with Brett Kavanaugh at the SCOTUS hearing yesterday and is claiming Kavanaugh "snubbed" his handshake.  Guttenberg is the father of a kid killed at the Parkland high school shooting.

If you Google "Brett Kavanaugh Fred Guttenberg" 108,000 results come up.  On the bottom of page two is a Washington Examiner article that defends Brett Kavanaugh, but the title of the article is sort of misleading. 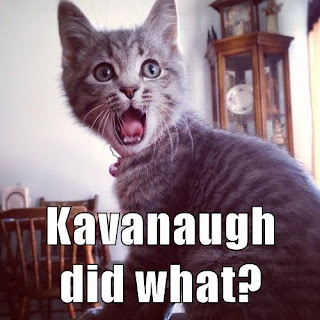 Continuing on through page eight I was unable to find another article that defended Kavanaugh. It isn't until page nine that a conservative site is referenced (Townhall.)  On page eleven another one pops up (Red State.)

It's a well known fact that few people will go past the first page when they search for something.  They sure aren't going to go lolly gagging all the the way to page ten or beyond.  That may be fine if you are searching "hard cooked eggs", but is pretty lame if you're doing a search for factual information on news.

Finding the truth is becoming almost impossible with the rigged results of searches and the shadow banning occurring on most social sites.


Save up to 40% on Thermos Funtainers

Deals in Men's Shoes
Posted by Adrienne at 7:57 AM