Trump in Charge: Everything as it Should Be...

Unless you're a lying commie/marxist/libtard - in which case you're giving new meaning to completely insane, off the rails, bat-shit crazy, unhinged, demented, and crack-brained.

Jim Acosta is the latest to whine that Trump is causing people to hate and harass the media.  It was okay when Maxine Waters demanded her followers to make life miserable for Trump supporters.  Doubling down, Acosta accused Hannity of spreading propaganda.  Yawn. 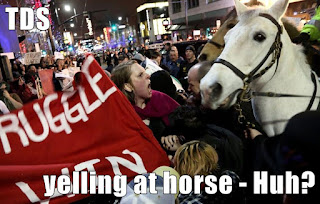 While Acosta's back was turned a woman suffering yuuuuugly from Trump Derangement Syndrome rammed a car with a Trump sticker on the back window.   But we're the dangerous peeps?

Meantime the Poop Pope is changing the catechism on the death penalty.  Is he committing formal heresy?  Very possibly.  It's one thing for him to voice his opinion on a subject, but to actually change the catechism stating that the previous teaching was "wrong" is dangerous territory.  What's next?  Perhaps the teaching that homosexuality is intrinsically disordered is wrong?  If he's trying to distract from the outing of the homosexual predators in the Church, he picked a good subject.

Is This the Calm Before the Storm?

Lately the news has held little interest for me.  Trump is doing his job (with 50% approval) allowing me to do mine.

As I go about my duties in conservative North Idaho the populace seems even more optimistic and cheerful than usual.  Is it the same in other parts of the country?  Perhaps you can let me know in the combox what you're witnessing in your little slice of the country.

However, the commie/marxist/libtards firmly ensconced in the deep state, will stop at nothing to get rid of Trump. They will accomplish this by trying to impeach him or, dare I say, actually killing him (there - I said it!)

If that happens (God forbid), I envision a civil war breaking out that will decimate this county.

During these difficult times, as the forces of good and evil battle for the high ground, it is a time for prayer, reflection, and calmness.

Want more info on an item?  Clicking on the "Buy Now" button only takes you to the item and does not obligate you to purchase it.