During the early days of World War II, with the fall of France imminent, Britain faces its darkest hour as the threat of invasion looms. As the seemingly unstoppable Nazi forces advance, and with the Allied army cornered on the beaches of Dunkirk, the fate of Western Europe hangs on the leadership of the newly-appointed British Prime Minister Winston Churchill (Academy Award nominee Gary Oldman). While maneuvering his political rivals, he must confront the ultimate choice: negotiate with Hitler and save the British people at a terrible cost or rally the nation and fight on against incredible odds. Directed by Joe Wright, DARKEST HOUR is the dramatic and inspiring story of four weeks in 1940 during which Churchill's courage to lead changed the course of world history.  source

For the past few years I've been reading not only WWII historical novels, but also history books on the war, and marvel at the strength of the European people when faced with such evil. 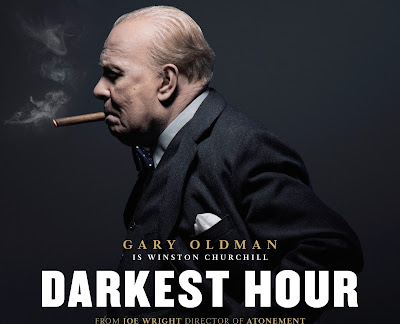 Winston Churchill, by all accounts, was an outspoken, brash, and often unpleasant person.  And yet, we can say with some certainty, that if it hadn't been for his leadership and the bravery of the English people, they might be speaking German now.

You must remember that at the start of the war people didn't view Hitler as we do today.  No one knew about the Nazi death camps and, if I understand it correctly, people generally made fun of him and were yet to understand what a murderous maniac he was.  And yet Churchill did see it, and he led the people to see it also.

There's a series on Amazon, The Man in the High Castle, that depicts the U.S. in the early sixties as though the Germans had won the war.  I stopped after three episodes because it was so ludicrous and badly acted.  However, it does make one stop and think what the world might be like now if Hitler had prevailed.

Historically, the movie is dead on.  Other than a few scenes added for drama, it shows the terrible decisions Churchill had to make against a good number of his own party who were against him.

It is difficult, as I was a Trump supporter from the day of the famous escalator ride to  announce his candidacy, to not compare him to Churchill.  I believe God sends certain people to do what needs to be done at a certain time.  I believe Trump is that person just as Churchill was before him.

Gary Oldman is brilliant as Churchill. The screenwriting, score, and cinematography, as well as the direction is also brilliant. Darkest Hour is a movie well worth your time.

Today is my history club meeting.  I take a small sketch book, as I do to all meetings, in which to doodle because it helps me focus.  It also enables me to jot down a note if something of importance is said or there is a point I'd like to research further.

Last week as I was trying out my new brush pens I wrote:


History is the Future


Save 30% on Select Nature Made Vitamins

I buy a lot of Nature Made products at Costco and really like them. These are great prices.

I receive a small commission when you purchase an item through my links - and I thank you.