because everything else is a big yawn.

For instance:  Anthony Scaramucci.  I don't give a rat's rear patootie that he got canned.  And guess what?  No one else does either.  Don't believe me?  Try standing in front of your local grocery store and ask the next 100 people exiting the store who Scaramucci is and the answer 99.9% of the time will be, "Who?" Besides, I'm not even sure what a Director of Communications job entails and couldn't care less.

Rinse Prius?  He should have been run off when they booted his bestie Katie Walsh.  He's not a friend to Trump.

Chaos in the White House?  Only if you listen to the MSM - so stop listening to their crap right now.  Capisce?

And how about that Somali muslim police officer, Mohamed Noor, in Minneapolis who over two weeks ago blasted bullets through the door of his police car killing an innocent Australian woman.  He shot across his partner who was the driver and reports are saying his partner's hearing has been permanently damaged.  Charges?  Not yet.  Two weeks for the BCA to investigate and no charges yet?  Hmmmmmmmm.

So take a moment to listen to Sarah Sanders mop up the floor with the lying liberal corrupt MSM reporters.

As for me, I'm headed to the store to snatch up some Sarah Lee mini hamburger buns and pickle chips because tonight I'm making White Castle burgers for dinner. 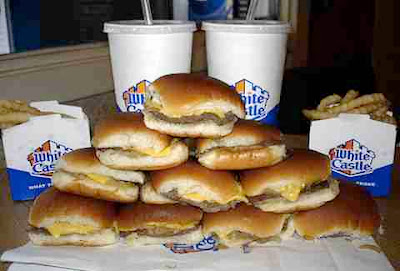 If you're from the west coast the importance of White Castle's will be lost on you.  I grew up on them and harbor a lust for the little sliders that will never go away.  I can buy them frozen, but it's just not the same.

While searching for something on Youtube this White Castle slider video popped up. I'm pretty dang sure he nailed it.

I got the dehydrated onions on Amazon and they smell wonderful and were a super great price.


I also took possession of a new microfiber wet/dry mop from Amazon that is outstanding.  No more expensive Swiffer pads to buy.  Yay.  And this mop did a waaaaaaaaay better job than Swiffer.  The little loops around the edge snagged the dust bunnies lurking in corners.  It's 18" and it took about 5 minutes to dry mop the entire house (our house is all wood floors.)  It takes about 30 minutes to use the Swiffer and I go through at least three pad refills.  Very expensive!

Lots of other great Deals of the Day at Amazon.