This isn't about Sandy Hook, Megyn Kelly, or Alex Jones...

this week's outrage in full bloom.

As the "Russian" hack keeps us all occupied with it's nonsensical attacks on Trump, we're being diverted by the latest Megyn Kelly dust-up over her interview with Alex Jones.  An interview, I might add, that is reported to have been snipped and clipped to make Alex Jones look like a complete fool and tries to tie him to Trump. 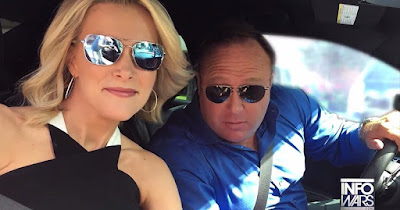 Admittedly, Alex doesn't need a whole ton of help to look silly, but anyone who thinks Megyn Kelly gets up on any morning and decides who she'll interview with no input from NBC, is beyond drinking Kool Aid and has slithered into the certifiably insane column.

Advertisers are dropping her show and she's being booted from some outside gigs for daring to interview Jones. I thought we had free speech in this country.  It's becoming quite obvious that's a lie.  If people don't like Alex Jones then they don't have to watch the interview.  It's really that simple.

'I find Alex Jones's suggestion that Sandy Hook was "a hoax" as personally revolting as every other rational person does.'

She then explained: It left me, and many other Americans, asking the very question that prompted this interview: how does Jones, who traffics in these outrageous conspiracy theories, have the respect of the president of the United States and a growing audience of millions?'

Kelly then offered theories, stating: 'President Trump, by praising and citing him, appearing on his show, and giving him White House press credentials, has helped elevate Jones, to the alarm of many.' source

How convenient that she can drag Trump into this brouhaha.

When Sandy Hook hit the news I remember not being 5 minutes into the many days of coverage and thinking, "Whoa, something is way off here."  I haven't time to rehash this and anyone who is interested can Google their way to more information.

I will repeat what I've believed from day one:  No one died at Sandy Hook.

I reached that conclusion based on the MSM coverage of the event and way before I was aware anyone else had reached the same conclusion.

This isn't about Megyn Kelly, Alex Jones, or Sandy Hook


This is about the lies and distortions heaped on the American people in an effort to demonize anyone who may have a different opinion.

Megyn Kelly is too far into her bubble to realize she is being used.  And Alex Jones is so hungry for attention that he willingly agreed to an interview in which he knew he would be demonized.

The real losers here are the American people who really believe that our government is incapable of doing anything stealthy or underhanded.  Most of what you see going on is classic Alinski tactics from his Rules for Radicals.

Just these four rules out of thirteen should be enough to make any thinking person sit back and say, "Hmmmmmmm"

5.  "Ridicule is man's most potent weapon." There is no defense. It's irrational. It's infuriating. It also works as a key pressure point to force the enemy into concessions.

8. "Keep the pressure on. Never let up." Keep trying new things to keep the opposition off balance. As the opposition masters one approach, hit them from the flank with something new.

11. "If you push a negative hard enough, it will push through and become a positive." Violence from the other side can win the public to your side because the public sympathizes with the underdog.

13. "Pick the target, freeze it, personalize it, and polarize it." Cut off the support network and isolate the target from sympathy. Go after people and not institutions; people hurt faster than institutions. source

The dirt people are being bombarded daily with messages that are the antithesis of all we believe.  Trump colluded with Russia (he didn't), Hillary Clinton had "no intent" to commit a crime by having a private server (she did),  MSM can use profanity on air and report fake news and it's okay (it's not), climate change is caused by evil humans (it isn't), black live matter (they don't in Chicago), aborted babies are just blobs of tissue (they're not), Islam is called the "religion of peace" (it's not), homosexual sex is touted as normal (it isn't), and a woman can lop off her breasts and take hormones and call herself a man and we're supposed to call this normal (it's not).  And woe to anyone who dares to say differently.

To know it's working all someone needs to do is witness the changing opinions of people in this country about all of the above that has occurred over just the past 10 years.

The left will not stop until they have what they want and that is to destroy President Donald Trump.  Don't let them win.