otherwise known as speculation, who cares, and a palate cleanser.

There's  a bunch of rumors swirling about that arrests will be made in the Pizza Gate pedophile ring  - possibly even this week.  For those who think this is just a bunch of nonsense, allow me to say that there is no doubt in my mind that such activities are rampant in the elitist "ruling" class.

And you want to know what the outcome will be if these arrests are made?  These unholy freaks will be defended by the left.  There will be an outcry by the left that these poor people are being unfairly targeted thereby proving that Trump and his followers are fascists, racists, homophobes, and all the other phobes they can dream up.

Leftists are fighting a holy war.  And the war is against you.  If you believe in God, the rule of law, and behavior that is decent and moral, you are the enemy and must be defeated.

They've declared homosexual behavior normal and just another manifestation of love. They will defend to the death a woman's right to kill her baby.  And the next battle field to fight on will be the right for children to have sex.  Think I've slipped over into conspiracy theory land?  Think again.  When an underage girl can obtain an abortion without the consent of her parents, even if she was impregnated by a legally aged man, that's the same as condoning a sexual act with a minor.  I'm not referring to the 18 year old man who knocks up his 17 year old girlfriend.  I'm talking about the 14 year old impregnated by a 35 or 40 year old man.  It happens more often than you could possibly imagine. 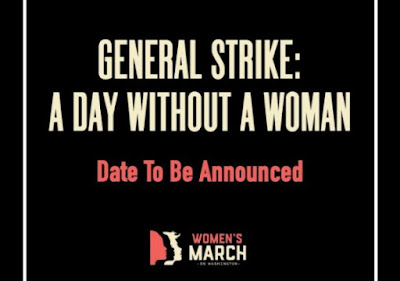 The wild and wacky "Ladies Who March™" are planning a day without women.  Really?  You're going to walk off your job?  Yep, 'cause nothing says I want equal pay like walking off your job.  Leave the dishes undone at home?  No one will notice because you're lousy housekeeper anyway.

I'm fixing to be brutal with my following comments.  If you are "triggered" by harshness, I suggest you not read what follows.

These women have as their goal to see how well the world does without their presence.   The answer is we'll do without your presence quite well because most of you are worthless.

My observations after watching them march around with silly pink hats plastered on their unkempt hair and wearing vagina costumes to cover up their overweight bodies, is that they are mostly useless bitter women.  I will also say that they are, for the most part, unmarried and if they are married it's to some beta male wimp who has been cowed into letting his wife emasculate him.

I can't remember ever seeing so many homely, fat, poorly groomed (dirty?) tattooed, and pierced women gathered together to declare their hatred for men and also for any woman who doesn't support their cause for abortion on demand (paid for by someone else) and free birth control. They screamed vile profanities and carried signs with unspeakable slogans and did it in front of the children they claim to love.

Proof of all of the above is their declared hatred for Ivanka Trump, a woman who has done nothing to harm them in any way.  You know why?  Because Ivanka Trump is who they really want to be.  A beautiful, gracious woman who apparently is happy to be married and in favor of children.  She is also a successful business woman who represents everything they wish they were.

So have your strike.  You won't be missed.

Today's Deals in Books
Posted by Adrienne at 12:35 PM