I'm neither a fan nor a non-fan of homosexual Milo Yiannopoulos.  And I'm also not a fan or non-fan of CPAC (Conservative Political Action Conference.)  Until about 10 years ago, I had never even heard of the organization or their meeting up every year to pat each other on the back and affirm their importance to the nation.  It's also pretty clear that most other people of this country have never heard of them either.

As with most conferences, a bunch of people spend untold amounts of money to gather together and listen to some speakers tell them stuff they already knew.  More important to them are the after-parties, business card swapping, and the feelings of being "someone" of some import.  If they happen to be bloggers, they can take lots of pictures with "important" people to post on their blogs (score!)

Milo Yiannopouls has become the homosexual poster boy for the conservatives.  I confess to having not listened to any of his speeches because I'm not one bit interested in anything he has to say.  Milo appears to be a flame thrower and uses his homosexuality to bolster his creds.  It gives a bunch of conservatives a chance to say, "See, look at me. I'm not a homophobe 'cause I like Milo."

But now they're torn between supporting a flaming queen or denouncing pedophilia since some tape has come out with Milo saying some very imprudent things about young "boys" having sex with older men.

I "get" what Milo was saying.  He wasn't saying it was okay to have sex with a little boy of four.  He was advocating for older men to help boys of thirteen or fourteen (or older) "find themselves" because in his world view if a little boy can have an erection and ejaculate, why then, he's fair game.  Never mind the maturity level of the kid.

This is the reality of homosexuality.  This is what just about all of them believe, so you may color my shock level at a minus 10.  But, pity the poor Milo fan who thought just because Milo said conservative stuff they could elevate him to hero status.  And now Milo has let them down by speaking the truth.

In the interests of fairness, you may read Milo's response on his Facecrap page.

And for all of you that are squawking about Milo advocating for pedophilia - he's not, so quit being hypocrites ready to throw someone to the wolves who doesn't support your internal narrative.  You're the ones who made Milo your pet homosexual and have now declared his 15 minutes of fame over.

Has Milo been Flynned?  Could very well be... 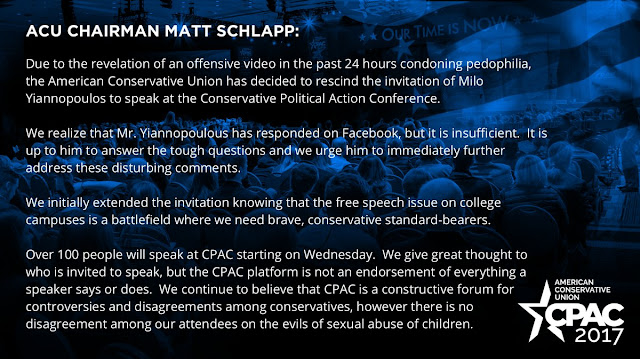 Some amazing Amazon deals in Computers

SHTF:  MILO DID NOT ADVOCATE FOR PEDOPHILIA: “My Professional Record Is Very Clear”