Trump Names the Enemy and the Reason...

and we thank him.

Notice key words in his statement:


"Our hearts and prayers are with the loved ones of the victims of today’s horrifying terror attack in Berlin. Innocent civilians were murdered in the streets as they prepared to celebrate the Christmas holiday.  ISIS and other Islamist terrorists continually slaughter Christians in their communities and places of worship as part of their global jihad. These terrorists and their regional and worldwide networks must be eradicated from the face of the earth, a mission we will carry out with all freedom-loving partners."  Donald J. Trump

And here is the reason and the perpetrators:

It is crazy Christian-hating Muslims


This makes me reflect on the most pampered and privileged women on the face of the earth.

The Women's March on Washington, scheduled for the day after Trump's inauguration, will be attended by the howling and screeching women of America who "fear for their lives."  Really?  Perhaps you should spend a bit of time thinking about what happened in Germany.  It wasn't a crazed Amish guy who killed 12 people who were gathered together to attend a traditional Christmas market.  It wasn't a rogue truck that suddenly decided to wage war on Christians.  It was a crazy Christian-hating Muslim.

You claim the high moral ground by proclaiming Muslim refugees your "neighbors."  Last I checked,  neighbors don't run you over with a truck.

Check out this post from the National Women's March page on Facecrap:


Gail Cookson I am creating Tolerance Safety Pins in time for January 20-21, 2017! Show your support and commitment to vulnerable groups. All net proceeds will benefit the ACLU and Planned Parenthood. We are going to need them both in the coming days, weeks, months. $10 (free s/h), 5 charms of your choice.

Tolerance for vulnerable groups?  Does that include the 12 dead Germans and the hundreds of thousands of dead babies?  How dare you talk about tolerance and diversity.

The women you claim are your neighbors, are forced to wear trash bags at the behest of their "tolerant" husbands and their genitals are mutilated to keep them "pure."

The homosexuals you claim to love and cherish, are routinely thrown from the top of buildings by members of the religion of peace.

Where are your prayers and concern for the thousands of Christians who have been savagely killed by these peace loving people you call your neighbors?

You have had the very virtues that makes women special, bred out of you by radical feminist crazies.  You think killing your babies is a right, and call it health care.  A real woman cherishes her babies; she doesn't kill them.

You women are despicable, and a disgrace to all real Christian women everywhere.  The babies you don't abort, you dump in government-run schools to be propagandized with the far left mantle of Marxism.  You mock women who have chosen to stay home and actually raise their offspring. 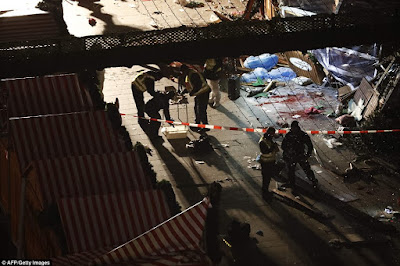 Look at this picture.  LOOK AT IT!

Socialist Angela Merkel, dear friend of Barack Obama, who encouraged and welcomed these killers into Germany, brought white roses to the market, and shed some crocodile tears.   Your hero, St. Hillary, wanted to do to us exactly what Merkel has done to Germany.

Go have your little march and publicly proclaim to the world how stupid you are, but keep in mind that no matter how many times you repeat "he's not my president", he is - and you're not in Kansas anymore.