Does Hillary have subcortical vascular dementia?...

It was weeks ago when a so-called "leaked" doctor report on Hillary Clinton was thoroughly disdained and seemly debunked.  Since then, it's pretty much dropped off the radar.  For me, that's a red flag that there may be more to the report than originally thought.

Of course, FactCheckers weighed in well before Hillary did a face plant on September 11th, in which even the liberal MSM deemed as troublesome.

In the report, with her doctor's name on the header,  subcortical vascular dementia was listed as a diagnosis. 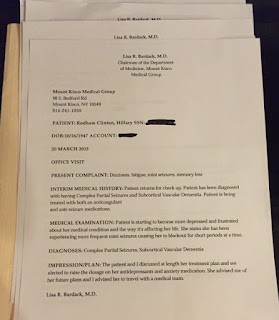 
It was described by Otto Binswanger in 1894, and  Alois Alzheimer first used the phrase "Binswanger's disease" in 1902. However, Olszewski is credited with much of the modern-day investigation of this disease which began in 1962. source

I then took a look at the account of the person who made the video. A member since April, 2014,  with videos that mostly concentrate on different conspiracy theories, some just plain ridiculous, does not mean that some of them do not contain a kernel of truth.  Viewership is quite high, with some in the millions.  Most of the videos are really quite silly, but is this one?

We've all been happy enough to jump on the "Hillary has Parkinson" bandwagon, a theory that I still think is the correct one.  However, a look at this video offers another possible explanation for her recent behavior.

In due time we will all know the truth.