She's the one who thought taking children as young as 11 to an adult sex shop for "education" was a dandy idea.


MINNEAPOLIS — Parents of students at a small Minneapolis private school are demanding the director resign after she led a field trip to a shop that sells sex toys and adult novelties.

“We are not happy with what happened,” said Steve Strawmatt, who has already removed his 10-year-old son from the school.

Strawmatt issued a statement on behalf of about nine sets of parents of kids at Gaia Democratic School who are outraged that director Starri Hedges took about a dozen middle, and high-school-age students to the Smitten Kitten late last week as part of a sex education course.

Meanwhile, parent Lynn Floyd filed a complaint with Minneapolis police accusing Hedges of exposing children to pornographic material. The police report recommends further investigation.
“I want her done and out, and that school closed,” Floyd said Thursday. “I want her away from children,” he continued. “It’s borderline predation.” more

The parents are outraged?  Really?  These parents put their children in a school named "Gaia Democratic", with a director who looks like the following pictures, and listing accomplishments such as:


Starri can be seen performing ritual sex magick with the Psycick Slutz, hungry ghost dancing with the Barebones Halloween Shows, and gasping in amazement at her aerial superstar daughter performing with Circus Juventas. source

Not much credibility in their recent outrage.  No siree... 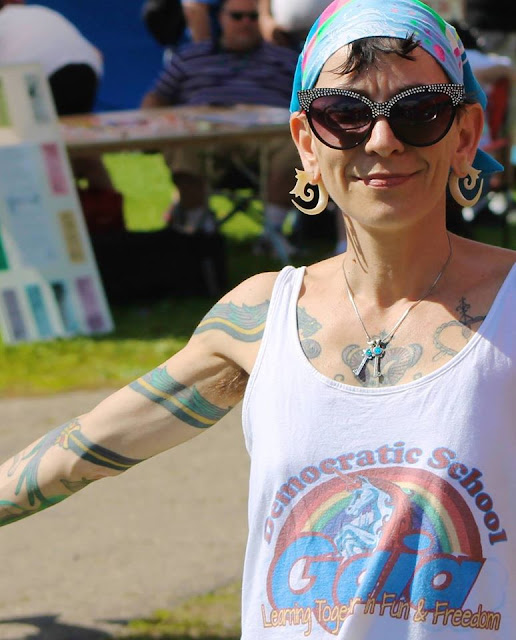