are there churches in Syria that look like this? 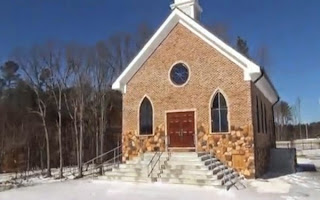 This morning I watched the following video over at Info Wars.  Yeah, I know, home of the crazy Alex Jones.  Rest assured, I would never subject you to the rasping sounds of Mr. Jones.

This video features two of his "newscasters" or whatever they're called on his site.

They report on a show that was on C-Span in which Colonel John Petkosek, commander of the U.S. Army Asymmetric Warfare Group at Fort A.P. Hill in Virginia, is interviewed.  Included is a tour of  the 300 acre facility which opened in 2014.

The Infowar guys are pretty focused on the people who called into the  C-Span show, and will play clips of the calls during their report.  These callers are all fairly alarmed, and bring up things they find weird about a training center that looks amazingly like small town America.  One caller asked about the confiscation of guns after Katrina, and worried that could happen again.  Another caller asked about Jade Helm and astoundingly, the commander said he really didn't know anything about that operation (that could be true since the armed forces operates in separate little bubbles.)

Infowars is spinning this as the great public awakening to the possibility of subversive activities going on right under our noses.

At breakfast, while explaining the highlights to hubby, my brain suddenly had an explosion of activity on the cellular level (always an exciting occurrence.)  Anytime something lights up over a plate of bacon and eggs, it is to be taken very seriously.

When listening to these calls, something kept nagging at me. My spidey sense was on overdrive.  Why would C-Span allow such inflammatory calls? Surely the calls are screened. And why did each of these calls focus on different events that have different groups of citizens concerned?  That's when I knew the answer.

These calls were all planned and scripted.

It gave Colonel Petkosek an opportunity to tut-tut over concerns citizens may have over some things that are going on in this country.  The reality, at least for me, was that many of the things he said made absolutely no sense.  You know that feeling you get after someone talks and talks, and when they finish you sit back and say, "What the hell did he just say?"

What better way to calm the sheeple back into their complacency than to have a nice reassuring authority figure like the good Colonel explain away all their concerns.  And it must be on the level because it's on C-Span, after all.  And, look how transparent they are in allowing all those alarmist type calls.

Moving on to Alex Jones and Michael Savage on the possibility of a full fledged race war.  Okay, I  lied about subjecting you to Alex and his rasp, but he sounds pretty decent in this short clip.  Listen to what Savage says and see what you think.  While listening, keep two things in mind: Fast and Furious and these words spoken by Obama in 2008 in Colorado:

It's human nature to engage normalcy bias.  We find it hard to believe as we head off to Starbuck's, that there may be things going on about which we know nothing.  Fifty percent of the time I'm tut-tutting myself, and the other fifty percent of the time I'm saying, "What the hell?"  It's at that point I remember Auschwitz and the Jews being complacently led off to their slaughter.   The full article: Savage: Obama may arm U.S. gangs for race war

Brandon Smith: When The Elites Wage War On America, This Is How They Will Do It

Mac Slavo:   This Is Why They Are Militarizing: ‘The World Will Become Baltimore When People Realize They Cannot Acquire Basic Resources’

Michael Snyder:  Baltimore’s Civil Unrest Is Only Just The Start Of Something MUCH Bigger

Zero Hedge:   There Will Be No 25-Year Depression