It's canning season and some prepper advice...

It's also going to be very hot today and tomorrow - close to 100 degrees, so I must get my outside work done early.

First batch of canning stuff:  sweet banana with cherry peppers and carrots.  My personal favorite?  Pickled beets.  Hubby hates beets.  No, really.  He'd rather dive into a pool of razor blades then be forced to eat a beet, so all those lovely beets are mine - all mine!  I'll probably make up another batch since my boss loves beets as much as I do.


After a lengthy discussion with the produce manager at the store where I work, I decided to buy another pressure canner.

He said that veggie prices were going to skyrocket this winter and veggies need to be pressure canned.  I'm also going to branch out into canning meat, since my freezer is packed.

I used to own a whoop-te-doo All American Canner.  They run over $300.00 for the large one.  I decided to sell it on ebay and managed to recoup my initial investment.

It holds 7 quart jars, 20 pint jars, or 24 half-pint jars.  I plan on canning chicken in pint jars and figure I will save about $1.50 per pound.  Each pint jar should hold about one pound which means I'll be almost half way to paying off the canner the first time I use it. 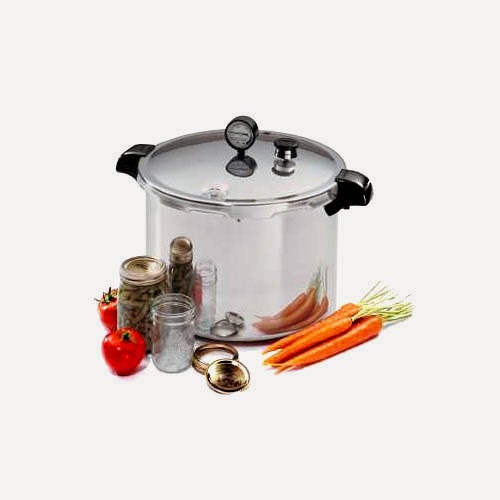 While our government is fond of telling you that things are wonderful, it's a lie.  I'm a careful and thrifty shopper and know my prices.  When I see prices jump one or two dollars per item, that is very alarming.  And I see that happening a lot.

Anything you can add to your pantry is better than money in the bank, since none of the banks are paying any sort of interest.  Indeed - some banks are charging you to keep your money in their bank.

It's a new world we're living in.

Patrice Lewis, who blogs at Rural Revolution and writes for World Net Daily, lives just south of us in the Palouse of Idaho.  She has wonderful advice on canning.  Give her a visit.

While I'm canning, I'll also be reflecting on how the president is spending his time.