Isn't it way past time for the "two minute hate" of George Zimmerman to be over?...

In the George Orwell world we now live in, George Zimmerman has become the poster boy for hate by the fools on the left.  In his novel 1984, all the people must gather together and watch a film depicting an enemy of the nation and then express their hate.


Within the book, the purpose of the Hate is said to satisfy the citizens' subdued feelings of angst and hatred from leading such a wretched, controlled existence. By re-directing these subconscious feelings away from the Oceanian government and toward external enemies (which likely do not even exist), the Party minimizes subversive thought and behavior. source 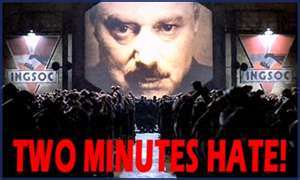 Isn't that exactly what's going on now?   No amount of facts can convince the poor downtrodden Negroes that Zimmerman is anything other than a racist, bigot, and a murdering bastard.  And the white racist, for surely if you consider this a racial case you are the most virulent of racists, feed the frenzy and pat themselves on the back for being superior to the "bitter-clingers."

It's all about controlling the useful idiots.  Problem is, it's not working.  Considering how hard this administration is trying to gin up trouble, there really has been little response by way of riots.  What's happening in a few locales is nothing more than business as usual.

Why exactly do we care?  Because someday these powerful forces could be turned against you, if they haven't already.

Jeffrey T. Brown does a masterful job of summing up the whole mess at American Thinker:

Now that a jury has considered the best evidence the State of Florida could offer against George Zimmerman, and that it did not prove that Zimmerman was either the aggressor or an intentional killer, the left has a problem.  It invested what little credibility it had entirely in using George Zimmerman as a distraction from the horrific violence in black communities.  The consequence, we were told before and have been told since, is that it is open season for non-blacks against blacks, and this case exemplifies how dangerous it is for blacks when they merely buy Skittles or wear a hoodie.

At the root of these accusations is hatred by the left of its political and ideological enemies.  They hate the lot of us.  READ THE REST