You have to be insane to do this... 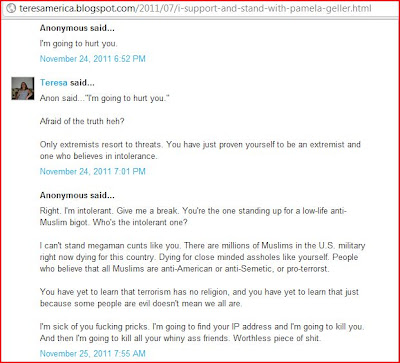 If there are conservative bloggers out there doing such things, I haven't bumped into one yet.  I'm had my own issues with crazy trolls, but certainly never one that threatened to kill me (no matter how appealing that might have been for them.) While the Disqus comment system allows me to black list certain IP (internet provider) numbers, having a statcounter is very good tool for recovering IP's.

Several times in the past I've had to contact an ISP (internet service provider) about one of their subscribers.  In both cases the ISP dropped the subscriber almost immediately.  In another case I was getting a gazillion (I'm not exaggerating) hits per second.  While increased traffic is nice, to witness your site going from moderately popular to something that would make Drudge jealous was a bit alarming.   I contacted the ISP in question who contacted the subscriber.  It seems he was running a spider that had gone haywire.  I received a very nice email and an apology from the person in question.
Posted by Adrienne at 11:55 AM