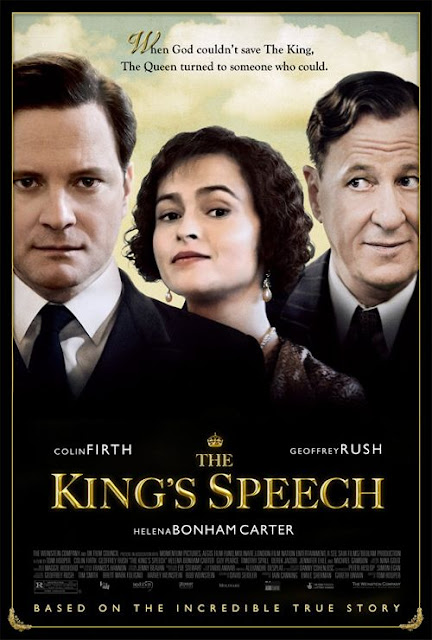 Email ThisBlogThis!Share to TwitterShare to FacebookShare to Pinterest
Labels: movie, The King's Speech

Is the film yet available on DVD?

AOW - No. But it's worth the price of a movie ticket. Amazon doesn't list a release date for the DVD. Since it's nominated for so many Academy Awards they may up the distribution around the country and wait on the DVD.

Don't care for the phrase on the poster but do want to see the movie. Not to mention it's got Colin Firth in it!!!!

I would never watch a film produced the lefty, liberal lunatics in Hollywood and Britain. Paying money to watch their film is only supporting their cause. Your entrance fee is helping their campaign to abort babies and support Obama.

It's a great movie. Not quite historically accurate in some details (Churchill, for example, was opposed to Edward VIII abdicating the throne). But the acting was top notch and even the supporting cast did a wonderful job.

My favorite scene was in the coronation chapel prior to the crowning, the confrontation between George VI and the therapist played by Geoffrey Rush. For me, that was the key scene in the movie. Fantastic acting by Rush in that scene.

So glad to hear that it is good. There are so few we can look forward to.

I have to go see this as my next movie pic, perhaps during the week. The lst show is only $5.50 where I go. I love Colin Firth and I predict he'll win the Oscar!