Assumption of the Blessed Virgin Mary

Today (Aug 15) is the Assumption of the Blessed Virgin Mary into heaven.  Father John Speekman has a wonderful homily posted and garners the coveted quote of the day designation.

[...]In today’s great feast we see the plan of God for all his children. We, too, are destined to rise in the body at the end of time. In this truth we see not only God’s love for us but the dignity of the human body.

As John Paul II says: the mystery of the Assumption proclaims the supernatural destiny and dignity of every human body, called by the Lord to become an instrument of holiness and to share in his glory.
What more is there to say? Let us study Mary and learn from her how to value our own body and to guard it as a temple of God, as we await our resurrection.  read the rest at his website 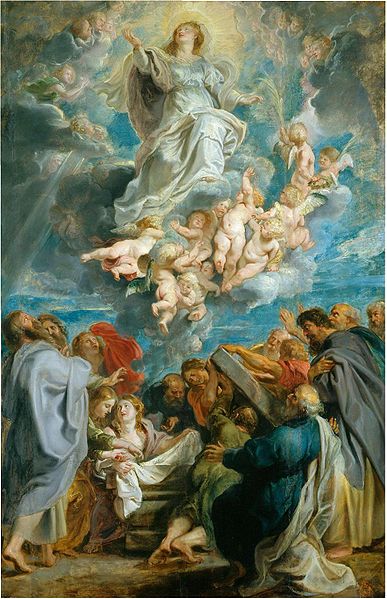 On November 1, 1950, Pius XII defined the Assumption of Mary to be a dogma of faith: “We pronounce, declare and define it to be a divinely revealed dogma that the immaculate Mother of God, the ever Virgin Mary, having completed the course of her earthly life, was assumed body and soul to heavenly glory.” The pope proclaimed this dogma only after a broad consultation of bishops, theologians and laity. There were few dissenting voices. What the pope solemnly declared was already a common belief in the Catholic Church.We find homilies on the Assumption going back to the sixth century. In following centuries the Eastern Churches held steadily to the doctrine, but some authors in the West were hesitant. However, by the thirteenth century there was universal agreement. The feast was celebrated under various names (Commemoration, Dormition, Passing, Assumption) from at least the fifth or sixth century.

Scripture does not give an account of Mary’s Assumption into heaven. Nevertheless, Revelation 12 speaks of a woman who is caught up in the battle between good and evil. Many see this woman as God’s people. Since Mary best embodies the people of both Old and New Testament, her Assumption can be seen as an exemplification of the woman’s victory.
Furthermore, in 1 Corinthians 15:20 Paul speaks of Christ’s resurrection as the firstfruits of those who have fallen asleep.

Since Mary is closely associated with all the mysteries of Jesus’ life, it is not surprising that the Holy Spirit has led the Church to belief in Mary’s share in his glorification. So close was she to Jesus on earth, she must be with him body and soul in heaven.
Posted by Adrienne at 8:37 PM

Email ThisBlogThis!Share to TwitterShare to FacebookShare to Pinterest
Labels: Assumption of the Blessed Virgin Mary

Thanks for the interesting reflection. One of my professors long ago said that the Church's Marian dogmas are like a fence that the Church has been lead to set up to protect its Christological doctrines. He used the Assumption to make that point -- that long before someone would deny the Resurrection of Christ, they would deny the doctrine of the Assumption, thus indicating a serious problem in that person's theology. Also, he noted, the Church's teachings about Mary always point us to a deep Christological truth. Again, as you noted in your post, the Pauline teaching on Christ as the firstfruits is reinforced by the Church's teaching regarding the Assumption.