Even though I'm not particularly fond of McDonald's,  a purchase of a Happy Meal is in my immediate future.   Life would be better if more people stood up to the loons running free in our society.  Hats off to McDonald's!!
From the Chicago Sun-Times

The Happy Meals toys are staying, according to a letter McDonald's brass delivered Wednesday to a health watchdog group that criticized the popular kids' meals and how they are marketed.
The Center for Science in the Public Interest last month threatened a lawsuit against the fast-food giant to get it to dump the toys that accompany Happy Meals.
Forget it, McDonald's CEO Jim Skinner said, defending Happy Meals in the written response sent to the Washington, D.C.-based group.
"Internet sites, blogs and network surveys suggest that public opinion is running overwhelmingly against your premise," Skinner wrote. "Our customer websites and phone lines at McDonald's are also busy, with more than nine out of 10 customers disagreeing with your agenda."
The strong public response is uncommon for the company, whose dominance in the fast-food industry makes its a target of a range of activist groups.
"CSPI is wrong in its assertions, and frivolous in its legal threats," Skinner said, calling the group's claims "over-the-top rhetoric."
Seeking to turn the tables on the group, Skinner called for an apology.
"CSPI's twisted characterization of McDonald's as 'the stranger in the playground handing out candy to children' is an insult to every one of our franchisees and employees around the world," Skinner wrote. "When CSPI refers to America's children as 'an unpaid drone army," you similarly denigrate parents and families, because they are fully capable of making their own decisions. You should apologize."
"Parents, in particular, strongly believe they have the right and responsibility to decide what's best for their children, not CSPI," he wrote. "It's really that simple."
When it threatened to sue last month, the group called the use of toys to entice kids to eat Happy Meals "unfair and deceptive marketing" that "is illegal under various state consumer protection laws."
"McDonald's use of toys undercuts parental authority and exploits young children's developmental immaturity--all this to induce children to prefer foods that may harm their health," the group's litigation director, Stephen Gardner, said at the time. "It's a creepy and predatory practice that warrants an injunction."

Meantime:
The Future of White Castle is threatened...
The only drawback to living in Idaho is not having access to fresh White Castles.  While they are sometimes available frozen at our local WalMart,  it's just not the same. I'm old enough to remember twelve cent White Castles and the thought of them going away is pretty dreadful.

From Right Side News:
Obamacare a Threat to White Castle and IHOP. This Time, It’s Personal
by Lori Ziganto. 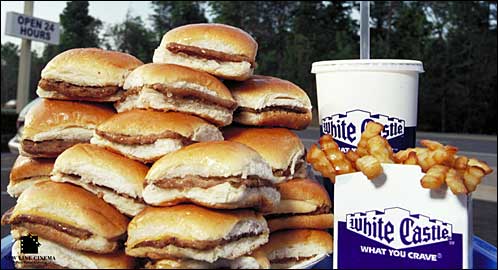 But they'll hand out condoms to any child in school regardless of age . . . with instructions on how to use them. They want parents out of the picture, these loonies making laws. Eejits!