I have been remiss in not mentioning Ten Buck Friday.  My blogger buddy, RightKlik, has been doing a wonderful job getting the word out.

Many of us get paid on Fridays... if we bring a sack lunch a couple of times a week to work, right there is an extra tenner. What if conservatives donated $10 each and every week up through November to viable candidates and/or PAC's that are promoting a conservative agenda? If you can't afford every week, what about twice a month? Or once a month? Conservatives need to put their money where their mouth is. Commit to Ten Buck Fridays... it WILL make a difference come November!

Ten Buck Fridays is a great idea, and I think it's one that should really catch on.

I'd like to join with conservative bloggers and conservatives on twitter to focus attention on a different candidate each week. Each week, deserving candidates could be nominated. Polling through the next several days could determine the crowd favorite...and on Friday, a good conservative would be hit with a grassroots moneybomb!

Imagine what a thousand grassroots conservatives could accomplish in unison. Ten thousand dollars a week would grab a lot of attention and could help some candidates who really need it.

Who will join us?


RightKlik announced at Midnight EDT that Congresswoman Michele Bachmann (R-Minn) is the recipient of funds from Ten Buck Friday Blogs with 42% of the vote. While some of us donated last week, this is the first week of promoting the program, so this is Week 1, even though some of us donated to poll winner Sharron Angle last week. Angle is aiming for Senator Harry's Reid's senate seat. After today, there are 18 Fridays ahead before the November election. 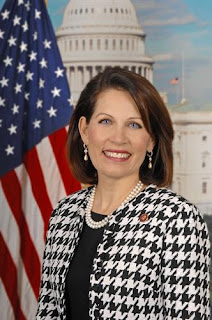 I was born and raised in Minnesota and have many (liberal) relatives that live there.  Their favorite term for Michele is "stupid" and an "embarrassment."  This coming from people that voted for Al Franken. That says it all.

Thanks for joining us, Adrienne, and you are most welcome to use my posts. I have you on my list and Polemicon will update also.

Thank you! I'm so glad TBF has your support.

I love the little personal note about the Minnesota liberal relatives.
Welcome to the group supporting TBF.

Maggie - thanks. That eases my "Catholic guilt" heh

RK - Anything you support is A-ok with moi!!!

Lonely - Ah, yes. Good old Minnesota. I have very close relatives that won't even speak to me. Their loss, doncha know!