While I was sitting around last night eating great food and pretending to be a normal person, The Blog Prof was hard at work - and for that we thank him.  The big news is the Obama budget. A budget dooming our children, and our children's children, to live under more oppressive taxes.
The Blog Prof: Obama's $3.83 trillion 2011 budget includes record $1.6 trillion deficit

The record $1.4 trillion deficit the current fiscal year wasn't enough (a number that Obama owns entirely as he either voted for or signed into law every single penny of it! and can't blame Bush). Obama wants to top it by $200 billion in the next fiscal year. read the rest and weep!

But wait! Could there be even more going on while we are being distracted by Obama's rape of this country?  Why, yes. Yes there is... 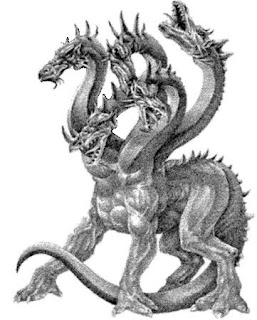 It is no secret that Obama pays very little attention to matters of foreign policy, except for flying around the world apologizing for the past deeds of America, or bowing to foreigners in such a way as to make a complete fool of himself . Good grief, he even bowed to the mayor of Tampa because it appears she may be of Japanese descent.
Often, we become so embroiled in the details of all that is going on - a classic Alinskyian tactic, we lose sight of the bigger picture.  The good Lord knows this administration throws so much stuff at us that we could easily become overwhelmed to the point of throwing our hands up and declaring surrender.  This is their goal and never, ever forget that important point. Ever!
One of the twelve tasks of Hercules was to slay the dangerous nine-headed Hydra.  He was lucky because he was able to slay the entire beast.  Our government has become much like the Hydra, but we are going to have to chop off each head one by one.
Pour yourself another cup of coffee and read this article from American Thinker.  Then come back here and check out what Ahmdinejad is saying from any of the sources listed below. Pour more coffee and connect the dots.
The Most Important Story You Didn't See Last Week (and Probably Won't Ever See)

A Senate hearing last week confirmed the public's worst concern about Barack Obama: that when it comes to national security, Obama hasn't just been asleep at the switch -- he hasn't even bothered to find the switch. read the rest

Awesome. You're on Memeorandum.

Way to go! What a great thing to have happen for your blog, Adrienne! Good job!

On a less celebratory note, everything that is happening now flows out a trend that C.S. Lewis observed in the lat 1940's. He called it the rise of the "omnicompentent state" -- the idea that the government can do anything and everything. The problem with that is, the govenrment simply can't keep track of all the information necessary to run everything. The C.S. Lewis-F.A. Hayek one-two punch!

Hey Duchess - you're "Most Important Story" link goes to Gateway Pundit's Obama bowing to the mayor of Tampa story.

Keep up the great work!

Larry - Sheesh - my first mistake this year. Thanks for saving my bacon...