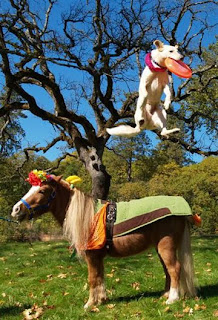 Eric Cantor states in this interview that the Republicans are not interested in a "dog and pony" show when they meet with Obama on health care. I'm not sure how it could be anything but a "dog and pony" show.  This meeting  is shaping up to be a classic Alinsky tactic: “Pick the target, freeze it, personalize it, and polarize it.”   They have already been "picked" as the target by attending a meeting completely controlled by Obama and his minions who will set the agenda, control the seating and even the cameras.

They will unable to respond (frozen) as Obama "scolds" and accuses them of being obstructionists - the "party of no."   They will be forced to sit quietly and accept this, or to get up and walk out. Neither of these options would have a good outcome.

Obama will personalize the issues by making it the Republicans fault  people are dropping in the streets due to lack of health care and being buried in Obama T-shirts (so creepy!), thereby polarizing the debate even more.

Here's the real kicker, though.  These people, and I include both Republicans and Democrats, still get paid no matter how much time and energy they waste. They will still receive all the perks of their job, and will leave office with an exorbitant tax-payer funded retirement.  Try that if you're running a business and see how well it works.


Some Excellent Reading gathered together, not with impersonal spy-bots, but through the hard work of my fingers and my eyeballs:


Creative Minority Report:  The Primacy of Humanity by Erin Manning
Homilies and Reflections from Australia:  6th Sunday in Ordinary Time
Keeping My Ear to the Ground: Mother Nature is Doing Us a Favor
DaTechguy:  The de-education of Anne Hathaway

"They will still receive all the perks of their job, and will leave office with an exorbitant tax-payer funded retirement. Try that if you're running a business and see how well it works."

And they will never have to use ObamaCare either. They get a wonderful healthcare indemnity plan.

Very cool site Adrienne. You're added to Mcnorman's links. Everyone should come here.

McNorman - how sweet. I just added your blog to my reader, and if I get my "desk work" done I'm going reorganize my links and get you up there. I actually meant to do that yesterday but I'm so disorganized sometimes...Sigh

Adrienne, I can't find an email contact for you here. Would you kindly email me? I have a question. You can find my address on my blog. Thanks.