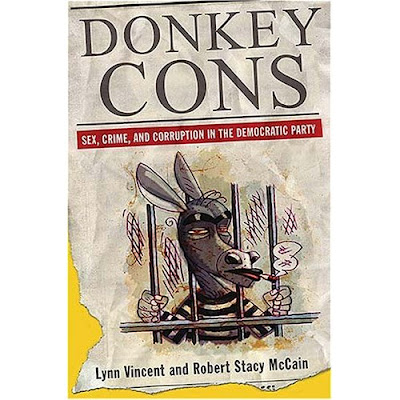 The severely deranged (IMHO) guy over at that green blog, the name of which I will not mention, thinks Robert Stacy McCain is a raaaaacist. I don't happen to think he is. I think he guilty of far worse things.

I hold Stacy responsible for completely devastating what little attempt at a schedule I may have. After my hubby and I plowed our way through his Italian birthday lunch yesterday, which included THREE baskets of garlic bread, I swooped into Hastings to purchase Donkey Cons, authored by Stacy and Lynn Vincent.

Since the garlic bread had already put me into plowing mode, I started to plow through Donkey Cons instead of keeping after my Google Reader. As a result I awakened at 5:30am, and to my horror, saw that my Reader was way over 1000. Any normal person would have deleted the entire thing and started fresh. Not moi. I commenced to more plowing, and now the 1000 plus posts are down to about 450. I may still hit that delete button after this post.

In spite of the fact that Stacy has never asked for my phone number, as he did for his new BCFF (Best Catholic Friend Forever), I will have to tell the truth (as any devout Catholic would do), and declare Donkey Cons one fine book. I particularly like being able to jump from chapter to chapter in no particular order, as an ADD riddled person is wont to do, without losing the thread.

As a result of all the plowing I accomplished on my Reader I have come up with some fine reading for you. I've given you enough to keep you busy all the way through tomorrow so maybe I can practice being devout on Sunday.

In spite of Stacy not sharing his extra commas or his co-blogger Smitty, and in spite of him not asking for my phone number, I will highly suggest you buy his book!

Speaking of devout, LarryD has a fine post on the subject, Does Devout Mean Anything Anymore?

I found this piece from American Thinker, A Sham 'Compromise' Health Care Bill Waiting in the Wings, to be rather alarming, but no more so I guess than the whole sham of a "health care debate." What debate?

Heritage Foundation adds more with COOP d'etat: An acronym does not a co-op make, and Your Guide to Budget Reconciliation and Obamacare

The BlogProf fills us in on the details of what's going to happen if you reject Obamcare. It's not pretty!

On Glenn Beck and Discover the Networks

From NewsReal comes Glenn Beck, DiscoverTheNetworks, and Exposing the Left by John Perazzo, and also Horowitz vs Frum: He’s Wrong About Glenn Beck and Apparently Can’t Handle My Side of the Debate, both of which are chock full of great links (in particular Discover the Networks)

LACK OF POLITICAL WILL ? HOW ABOUT POLITICAL GRANDIOSITY? from Dr. Sanity hits the Obama nail on the head.

Father John Malloy has one of the saddest posts ever. The reality of what is going on in India will make your heart ache. Petals in the Dust: India's Missing Girls, points out what is happening to the girl children, both in and out of the womb, in India.

The lovely Mary Rose over at True Confessions of a Prodigal Daughter, tells us about the latest toy craze in Mattel Fails With New American Girl "Homeless" Doll

Now if reading all of the above has made you want to put a gun to your temple and scream, "Why, God?, here is some uplifting and worthy stuff to give you purpose and hope.

Fr. James Farfaglia has an excellent homily on sloth (not the three toed kind), but best of all he gives us real things to do to overcome this sin. (If you're not Catholic just plug in bad habit for sin.) I love this quote from the homily:

Mighty Mom has sent me the loveliest gifts. Things that are handmade with love are just the bestest! I promise you a picture when I get caught up. And guess what else?? Now I actually know the names of her children. And gosh what a bunch of beautiful names (for beautiful children!!)

RJW, a faithful commenter to many, having been bullied into starting a blog, has already succumbed to the "tinker disease." Tara, his friend and co-parishioner under the dictatorial leadership of Father Erik (who I heard celebrates Mass with an Uzi on the altar in case someone tries to walk off with a consecrated host), will be helping him make decisions. Brand new grandma Tara, could use some prayers for her new grandson so pop over there and cheer her up. And Father Erik (who prefers Father Richtsteig except I have so much trouble spelling it that I've settled for Father Erik and I hope he forgives me), gives us his ten dollars worth on the CCHD and ACORN.

And lastly but not leastly - my birthday is coming up New Year's Eve. It's never too early to start shopping and to make your job easier The Crescat has posted a picture of the perfect gift for me. I guess it's something Lola wants (smart gal) but since I'm older it should definitely go to moi!! 'Nuff said.

And while you're over there, hit her donate button and throw a few shekels her way. The Crescat suffered a heart attack a very short time ago and requires lots of expensive meds. Along with going to school full time and caring for her young son she could use some help.

It is 12:15 pm and I have been hard at work since 5:30 am with only a short break for breakfast and I still have my emails to check. I'll see you all later...

Updated FMJRA to note your review.
Thanks,
Chris

thanks for the linky love!
and good grief it'd take me a month to go through all those!!!

Thanks for the plug. You're great!

Tara's grandson MAY come home later in the week. (Latest as of this morning)

No Uzi for the Orthometer. I think it might be a Browning M1918. (Local company)