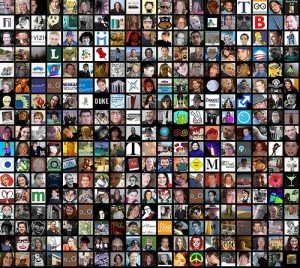 Someone help me out here. What is the difference between adding someone to your Google Reader or "following" them? Other than the obvious boost to the bloggers's ego by having lots of followers, I was wondering if there were other advantages that I may be missing?

Not that the ego thing is small potatoes. I admit to feeling pangs of jealousy when I see my friend's list of followers soar past my measly little number.

Therese over at Aussie Coffee Shop has 80 and Adoro has 82. Not that these fine ladies don't deserve to have lots and lots of followers - they do. Oh yes, Adoro is on a troll hunt. I would have offered to loan her my troll but now she has one all her very own.

I would expect someone like Father Longenecker (145) and Father Powell (117) to have lots of followers. And we won't even get started on the big guys like The Other McCain ,who get five to ten thousand hits a day.

So the question is: Should I use my usual tactics of whining while sitting in a corner twirling my hair (I learned how to do that from Angela, bless her heart!) to obtain more followers, or should I save the histrionics for the the annual Cannonball Catholic Blog Awards?


Meantime our current President, using the EPA as a smoke-screen is, sticking it to the Navajo Nation. (who, if I'm not mistaken voted overwhelmingly for Obambi). I'm not a big fan of this whole Indian reservation thingy, which is primarily responsible for the lousy life of most Indians.

Don't get me wrong - I think ultimately people are to be held responsible for how they live, and the good Lord knows we spot all the minorities ample extra points so they can prosper. However, sticking them on a plot of land and handing them a government check each month is not a way to foster independence and hard work. It's just a form of welfare that harms more than helps.

And tomorrow our current President will fire up those three jets to pop over to Missouri to celebrate his 100 days of destruction. Hundreds of thousands of dollars will be used like the Monopoly money it is fast becoming.

Want to know one of the filthiest things you can handle? Sure you do! It's the handle on the shopping cart at your favorite grocery store. I cringe every time I see some little kid sitting in the seat gnawing on the handle. Ugh!

If you have little ones cover the handle with a plastic bag from the store or use a anti-bacterial wipe to clean it off. And don't eat samples without using a anti-bacterial solution on your hands first.
Posted by Adrienne at 11:41 AM

Adrienne, I don't really know the answer to your question being sooo computer literate. ya, right. But, I subscribed to your blog in Google reader, then somehow moved "you" over to my dashboard where I follow you anonymously (sp?). Confused? I still am.

I'm thinking that if you "follow" someone, you little icon shows up on their blog and your blog shows up on that person's profile under "blogs I follow". I know sometimes in my reader, if I'm following, it will automatically subscribe me in google reader. So really, who knows?

Until the followers gadget came, I had no idea who was following me or had me in a reader. The only way I would know was if sitemeter told me they came from google reader and they left a comment.

I really like the followers gadget. Like you said, it is good for my ego to have this many followers. My son tells me though, until I have as many as Sr. Mary Martha, I am no one in the blogsphere. Just as well I take his opinion with a grain of salt.

Excuse me Missy, but I happen to adore each of my SEVENTEEN followers....and I did notice YOU weren't one of them! ahem.


when you follow a blog openly (as opposed to anonymously) then that blog is listed on your profile. It's like a different way of doing your blog roll. I don't have a blogroll list on my already overcrowded sidebar...but if someone wants to see what blogs I go to they just pull up my profile and all the blogs I follow are there (including YOURS) ahem.

It also allows me and others to see who's following my blog as they show up on my sidebar. (well, except for YOU...even though you come by all the time...) ahem.

Any and all blogs that I follow are then automatically transfered into my google reader and both lists are updated at the same time so I then actually do my blog reading from the google reader.

So, to answer your question, following is google reader plus two-way blogrolling.

Its so true about the supermarket.

I and the darlings got sick really really badly with the GI flu and the only place we had been was the supermarket that week. It had to be that nasty shopping cart!


As far as the reader/follower, it only makes it easier to have that much more to manage. Uuughhhh!

Adrienne - if your daily blog hits are less than the number of followers, then you might have something to complain about! :-)

I just got back from the grocery store - I better go wash my hands again...