I expect the attacks to ramp up with the nomination of Catholic Judge Amy Coney Barrett.

This is not just an attack on Catholics, but an attack on all Christians. Let me remind you, the commie/libtards don't just hate Trump - they hate you. If you're a Christian, they really, really hate you.

In our smallish town in North Idaho our church is now locked and parishioners who wish to visit the Blessed Sacrament, pray, and meditate outside of Mass times are issued a key card.

We are building a beautiful new church and are using what will eventually be the parish hall as our church until the main church is built.  However, the parts already built are large, very expensive, and quite grand.

How has this become the "new normal" in our world?

WASHINGTON, D.C., September 26, 2020 (LifeSiteNews) – Sixteen members of Congress have asked Attorney General Bill Barr to investigate the perpetrators of “anti-Catholic hate crimes” in the United States, including “any organizational or ideological connections between them.”

Their letter was sent to Barr, himself a Catholic, on September 25.

Led by Rep. Jim Banks (R-IN), the legislators voiced their concern over “an unusual number of horrific and brutal attacks on Catholic and Church properties,” and listed a number of examples of violence against Catholic Church property.

“On July 12, an arsonist set a statue of the Blessed Virgin Mary on fire at the historic Saint Peters [sic] Parish Church in Boston. The day before a man in Florida drove a van into the side of a Catholic Church while parishioners were inside, then spilled gasoline onto the Church’s foyer and attempted to ignite it.”

“Also, on July 11, the San Gabriel Mission in California was burned to the ground,” the letter continued. “In the weeks prior, local activists had denounced the Mission’s founder, Father Junipero Serra, so the Mission removed his statue to mollify potential attackers—apparently to no avail.”

“That same weekend, outside of St. Stephen Catholic Church in Chattanooga, unknown vandals beheaded a statue of the Virgin Mary. And these attacks are ongoing.”

Most recently, on September 11, a man was videotaped in the Diocese of Brooklyn, New York, toppling a statue of Our Lady of Guadalupe, “an iconic image of the Virgin Mary often venerated by Hispanics.”

“To attack the Blessed Mother on the day of 9/11, in the morning, in broad daylight is not only brazen, it is a direct assault on the faith of the people who were walking by that day who wanted to have a moment of prayer,” said John Quaglione, a representative of the Diocese of Brooklyn in an interview with CBS New York.

In the video, a man can be seen climbing behind a fence at the front of the Coney Island church in broad daylight, tearing down the image of Our Lady of Guadalupe, and tossing it onto the sidewalk below. The statue’s face was smashed and her hands were broken off.

On September 16, a 30-year-old man toppled and destroyed a statue of the Sacred Heart of Jesus located on the high altar of the cathedral in El Paso, Texas.

“A suspect came into the sanctuary at St. Patrick Cathedral and destroyed the almost 90-year-old statue of the Sacred Heart of Jesus, which was located in the center behind the main altar of the church,” the diocese stated on Instagram. “The church was open and available for prayer.”

Two photos published by the diocese show the statue, lying flat on the floor, with Christ’s head smashed in, and only the neck and part of the beard still connected to the statue. One of his outstretched arms is broken off and can be seen several feet away from the statue on the floor. The base is detached from the statue, as well. 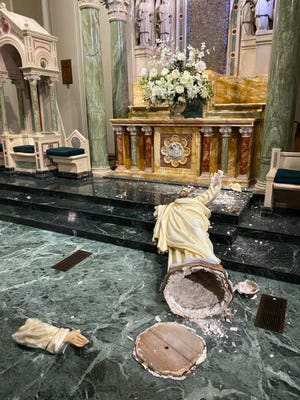 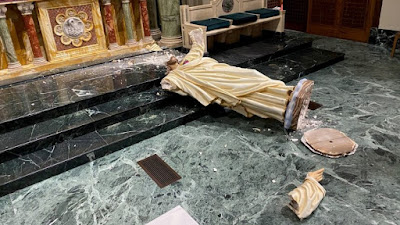 The 16 Congressmen said they were “not the only ones who have noticed this trend,” but also many media outlets.

“By some estimates, there have been 70 such incidents in North America this year with the vast majority occurring in just the past four months,” they wrote. “Since May of 2020, there have been 57 reported instances of anti-Catholic hate crimes in the United States alone. In comparison, the FBI reported just 53 instances of anti-Catholic hate crimes in all of 2018.”

For the legislators, this “suggests that anti-Catholic hate crimes are occurring at around a four times greater frequency than two years ago. As in any other instance of a rapid spike in hate crimes targeted at a specific group, the Justice Department’s Civil Rights Division has an obligation to investigate the perpetrators of this violence and any organizational or ideological connections between them.” 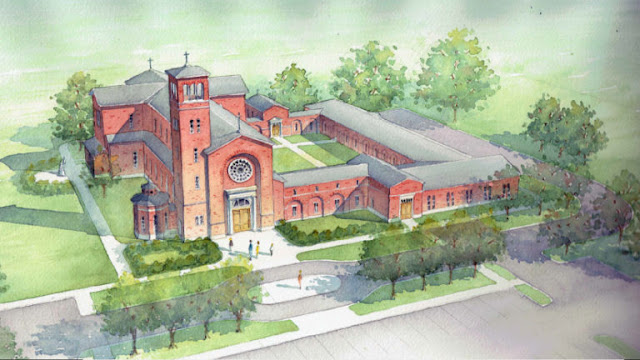