Is this part of what's wrong with the democrat party?...

wherein I proceed to make a whole bunch of people really, really angry.

At the beginning of the State of the Union address when they panned the chamber the democrat women all tricked out in white really stood out.  My first thought was, "Holy crap - that's a lot of white."  I quickly cast my eyes to the the other side of the aisle and ascertained there was not nearly as many women present.

To make sure, I did a bit of research and discovered that in the Senate we have 17 democrat women serving and 9 republican women.  In the House of Representatives we have 89 democrat women and 13 republican.

Could that be part of their problem?

In my opinion - yes.

Science has proven that men and women are fundamentally different. Their brains are different sizes and the way they react, think, and feel is different.  Nature has provided for the perpetuation of the human race by giving them different hormones (and different body parts too) that drive different behavior. The behavior and traditional roles of men and women are complimentary and not in conflict. One is not "better" than the other - just different.

It is why men traditionally do better in the STEM (science, technology, engineering and mathematics) disciplines. The current thinking is that it's societal bias keeping women from excelling in these areas when the truth is that most women are not attracted to these fields.  Those few who are attracted generally do quite well and very often outperform men.

But our current society and the divisiveness of the communist/Marxist influence tries to make women into men and men into women and it's not working out too well.

Now before you tie me to a stake and strike the match for daring to allude that perhaps having a bunch of women in positions of political power is not a good idea, let's just examine what happened at the SOTU. 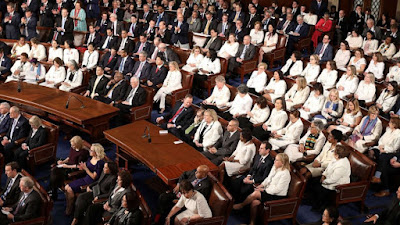 First you had the democrat women all dressing up in white like some KKK meeting without the hoods.  Apparently they were making a statement in defense of equal rights for women.  I have yet to figure out what rights they don't have.

Remember the "mean girls" in high school? They dressed alike and as a group scorned and belittled anyone who wasn't part of their little cadre. As a group they were catty, cruel, arrogant, and generally ignorant.

This group of women at the SOTU appeared to be making up for not being part of the "in" group in high school by forming their very own mean girl group.  They shrieked, giggled, rolled their eyes, looked at their phones, and just generally acted like undisciplined high schoolers.

Nancy Pelosi, in the ultimate emotional reaction to something that angered her, ripped up the SOTU speech.  I can't really imagine seeing a man doing such an obviously childish thing.

The majority of headlines are dedicated to the ultimate "mean girl" group called the squad.  If you boiled down the brains of members Alexandria Ocasio-Cortez of New York, Ilhan Omar of Minnesota, Ayanna Pressley of Massachusetts, and Rashida Tlaib of Michigan I doubt whether you'd come up with one complete brain. Am I being catty?  You betcha!  And I don't think anyone can argue that these four aren't mean to the extreme.

The trashing of our society cranked up to warp speed when the feminist lie was sold to women.  If you'll recall the original lie was sold to a women who convinced a man it would be a good idea to partake of the forbidden fruit.

So maybe if these mean girls would take themselves back home and concentrate on raising decent intelligent God fearing children our society might improve.

Just to be fair it might also be time for men to start acting like real men.