because I'm all about easy.

While Florida attends night classes on how to count past ten, New York flounders about in a "historic" winter storm of a couple of inches of snow, and a commie/marxist/libtard judge says Jim Acosta has a "right" to be rude at the White house, lets talk about making mug bread.

There are numerous recipes on the web for this quick and easy low carb friendly bread substitute.  After trying several different ones I settled on the one that was guaranteed to make the biggest mess and use the most number of little measuring spoons.

As always, my first question concerning any task is, "There must be an easier way."

Here is the recipe I use:

As you can see that uses three different teaspoons plus a half teaspoon and gets stuff all over the counter.

I knew immediately the easier way was to pre-prep a bunch in little containers.  I researched Harbor Freight for those little screw together containers (a very good option), Amazon for little jars, and Michael's for bead containers.

Not wanting to go to a slew of different places I decided on Michael's and stumbled on little bead containers that on eyeballing looked like the perfect size.  They were 2 inches tall and 1 inch in diameter. 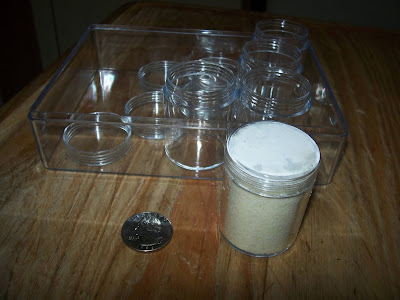 When I started to fill the first one it became clear that it was going to be a very tight fit, but by pushing down the almond flour it turned out to be exactly the right size.  Wowzer!  No more measuring!  Just pack the little jars with almond flour, throw a 1/4 teaspoon of baking powder on top, and done.

I always say a quick, "Thank you, God" for these serendipitous little occurrences. I also always thank God when I get an instant smack up side the head when I've done something I shouldn't have.  Both are blessings.

I made up about 10 little jars in about 5 minutes which should be enough for at least two weeks or more since I don't make these every day.

Next I carefully eyeballed what one and half teaspoon blob of butter looked like.  The butter doesn't need to be exact. 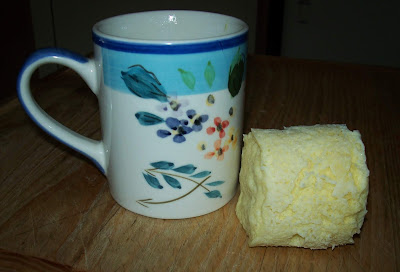 To make I spray the mug with olive oil, then I put the blob of butter in the mug and melt it in the microwave, add the egg and whip it up, dump in the little jar of flour and baking powder, mix it up, and stick it in the microwave for 90 seconds.

No hauling out a bunch of containers, no dirty measuring spoons, and no mess on the counter. 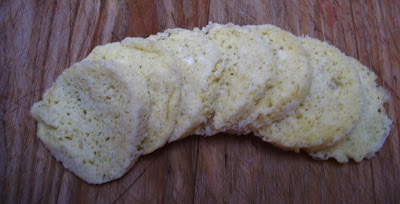 After the bread cools for a bit I slice it and toast it in my convection oven.

It can also be fried in a pan with butter or ghee.

Toasted, they're perfect for guacamole, nut butters, or dipping in your fried egg yolk.

I'm sure you can have fun adding herbs or a bit of grated cheese for a change of pace.  As Bob Ross would say, "It's your bread, you can do anything you want."

Black Friday Deals all this week!

I receive a small commission when you purchase through my links - at no additional cost to you, and I thank you.