Feast of Christ the King...

in the extraordinary form of the liturgical calendar and Mass.

The feast of Christ the King was instituted by Pope Pius XI with his encyclical Quas Primas (11 December 1925). The Holy Father states clearly his purpose for instituting such a universal feast day. 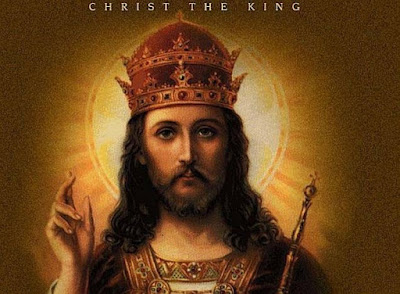 I suggest that everyone take a few moment to read Quas Primas and ponder the wisdom it contains.  The opening paragraph sums up the ills and evils of the world we inhabit (emphasis mine):


In the first Encyclical Letter which We addressed at the beginning of Our Pontificate to the Bishops of the universal Church, We referred to the chief causes of the difficulties under which mankind was laboring. And We remember saying that these manifold evils in the world were due to the fact that the majority of men had thrust Jesus Christ and his holy law out of their lives; that these had no place either in private affairs or in politics: and we said further, that as long as individuals and states refused to submit to the rule of our Savior, there would be no really hopeful prospect of a lasting peace among nations. Men must look for the peace of Christ in the Kingdom of Christ; and that We promised to do as far as lay in Our power. In the Kingdom of Christ, that is, it seemed to Us that peace could not be more effectually restored nor fixed upon a firmer basis than through the restoration of the Empire of Our Lord. We were led in the meantime to indulge the hope of a brighter future at the sight of a more widespread and keener interest evinced in Christ and his Church, the one Source of Salvation, a sign that men who had formerly spurned the rule of our Redeemer and had exiled themselves from his kingdom were preparing, and even hastening, to return to the duty of obedience.

(…)  “Nations will be reminded by the annual celebration of this feast that not only private individuals but also rulers and princes are bound to give public honor and obedience to Christ. It will call to their minds the thought of the last judgment, wherein Christ, who has been cast out of public life, despised, neglected and ignored, will most severely avenge these insults; for his kingly dignity demands that the State should take account of the commandments of God and of Christian principles, both in making laws and in administering justice, and also in providing for the young a sound moral education.”