Need help with downsizing or decluttering?...

plan a Kamikaze clean out.

We all have it.

Some more than others.

Once you have stuff it breeds in the dark of night until cleaning out and organizing becomes almost impossible.

Shortly after moving onto our 5 acre property 20 years ago we had a 30 x 40 pole barn built.  That works out to 1200 square feet. To put that into perspective an average two car garage is about 670 sq feet.

Do you have any idea of how much stuff you can pack into a barn that size?  Not only does it easily accommodate our two vehicles, it is also home to two lawn tractors, two walk behind mowers, two weed whackers, a small roto-tiller, a small wood chipper, and a small snow blower. There is also trailers for the tractors, wheel barrels, garden carts, and a cord or two of wood.  And..........a work bench with a full size rolling tool box and a craft area. That still leaves plenty of room for "stuff" to lurk.

We also have a 10 x 14 shed that was here when we purchased the place.  Most of the garden chemicals and garden tools live there - also leaving a bunch of room for more "stuff."

One of the biggest problems people face is how to get rid of "stuff" until it becomes overwhelming.

You need to cast about in your community for a competent affordable trash stuff hauler. Check your local paper, Facecrap, and ask your friends for recommendations, which is exactly what I did.

So yesterday I started what I thought was going to be an onerous task, but instead turned into a liberating and exciting project.

It is pure joy to start stacking "stuff" in a big pile to be dealt with by someone else for a fee.  Sure - you can plan trips to the dump yourself if you're lucky enough to have a truck (right now we don't.) But that's how clean outs get stalled.  It never seems to be finished.

We're not exactly candidates for a segment of the TV show Hoarders, which I'm sure was only popular so peeps could sit back and say, "Well, thank God I'm not a slob like that person."  But it's certainly more than I wish to deal with. 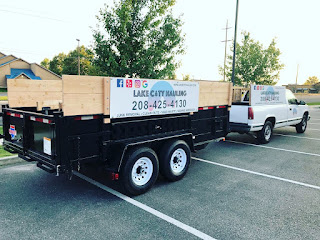 With the knowledge that a hauler is coming, we can be a bit more brutal with our decisions.  I didn't have to think twice about the three broken plastic lawn chairs and chucking them in the pile was pure bliss.

If you don't have big furniture or other big "stuff" you can also contact your trash pick up peeps.  Many of them will bring a dipsy dumpster to your house and pick it up when it's full for usually not very much cost.

My pile so far: 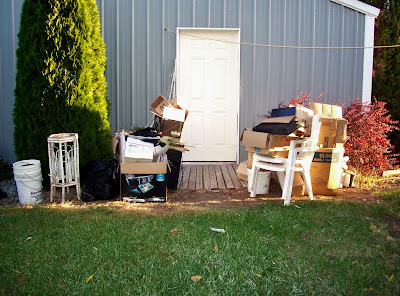 It really doesn't look too bad, but I plan on doubling that pile over the next few days.

There is also a small donation pile inside the barn that I'll take myself to the thrift store.

Hopefully, by the end of next week it will be gone!


I urge you to consider doing your own clean out.  Having a lot of stuff is a burden - both physically and mentally.  Just do it...

Email ThisBlogThis!Share to TwitterShare to FacebookShare to Pinterest
Labels: Organization