you're all a waste of oxygen.

Yesterday the harridans, led by their hero muslim activist Linda Sarsour, gathered in DC to jam up traffic, make noise, and generally annoy people to protest illegal aliens being treated like the law-breakers they are.  They were all willing to "risk being arrested." 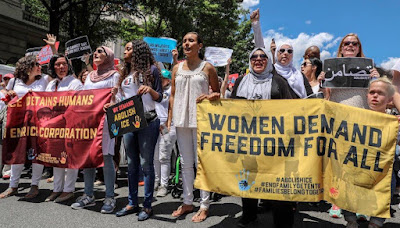 On the Women's March Facecrap page they raised over $150K to pay the $50.00 post and forfeit for those arrested.  The number arrested is approximately 600.  With my mad maths skills I figured out that leaves $120K just hanging around for Sarsour and her few lieutenants to spend as they wish.

Considering the wasted money and time that could have been used to actually improve the lives of others, these women chose to make spectacles of themselves.

In September I will have had my Instant Pot for two years.  I don't know how I managed without one.