you will be missed.

Some of my readers may remember frequent commenter and blogger who most often went by "Mark in Spokane." 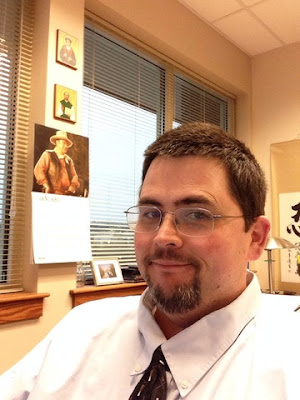 Mark was a professor of law at Gonzaga University in Spokane and about a year and a half ago moved to Olympia where he was a senior legal analyst for the Administrative Office of the Courts.

He had his own blog for a few years and then wrote for The Imaginative Conservative and The New Reform Club.

Eleven months ago he was diagnosed with stage four glioblastoma and passed away June 2 with his loving wife Azelle and his sister Earlene by his side. Mark was 48 years old.

Mark and I enjoyed many a lively legal discussion and the occasional lunch.  He was one of the most brilliant and well studied individuals I've ever had the pleasure of knowing.

The world has lost a great man and God has gained a new angel.