As soon as I post this, I will head over to the NRA website and officially join.


HELP FIGHT THE SOCIALIST WAVE"President Trump's election, while crucial, can't turn away the wave of these new European style socialists bearing down upon us … How about Kamala Harris, Elizabeth Warren, Bill DeBlasio, Andrew Cuomo, Corey Booker, Christopher Murphy and Keith Ellison … they hide behind labels like 'Democrat,' 'left-wing,' and 'progressive' to make their socialist agenda more palatable, and that's terrifying."—Wayne LaPierre 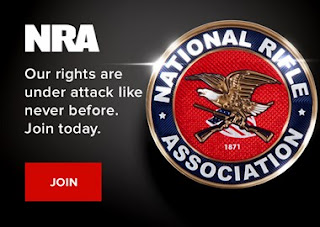 We are not helpless in the current assault on our rights as citizens of the United States.

The vile leftist ideologues have placed their demon inspired sights on the National Rifle Association.

As Steve McCann pointed out in his article at American Thinker today:


The litany of major American companies severing their ties to the NRA continues to expand.  They are succumbing to the drumbeat of false accusations and hysteria ginned up by the left and its political arm, the Democratic Party, as well as the left's cohorts in the media.  The NRA has been in leftists' crosshairs for the past two decades.  However, the actual purpose of this targeting is far deeper than what the left proclaims to be its objective: the passage of "commonsense" gun laws and restrictions on gun ownership as an antidote to gun violence.


The major tenets of their long-term strategy of ultimately controlling a potentially all-powerful central government in perpetuity are:

Mark Steyn:  A Total Failure of the State

Jack Cashill at American Thinker: Incompetence Wasn't the Problem in Broward County (this is PC on steroids)

Legal Insurrection:  Iowa State Senator Introduces Bill to Protect Belief-Based Student Groups  (we have a serious problem when a bill has to be passed to protect people of faith)

Save up to 30% off select baby products

Save on Cell Phones and Accessories

Email ThisBlogThis!Share to TwitterShare to FacebookShare to Pinterest
Labels: NRA