Is Bannon and "Fire and Fury" a diversion from the Manafort lawsuit?...

wouldn't surprise me one teeny bit.

But then, nothing the swamp creatures do surprises me anymore.  I may still retain the ability to be shocked, but surprise bit the dust long ago.

I go away for a few hours yesterday and while otherwise occupied, Sexy Paul Manafort the Great files a civil lawsuit against Robert Mueller, Rod Rosenstein, and the Justice Department.

I can't comment on the lawsuit because it's 64 pages long and I haven't had time to read it all yet.

However, it's not lost on me that before scooting out of the house yesterday morning the MSM was squawking about the suit - bigly.

All of sudden the lying filthy unethical MSM is pushing the story about Bannon apparently going all cray-cray and trashing Jared Kushner.

Within hours of that, excerpts from Michael Wolff's upcoming book, Fire and Fury, are released.  Guess what?  According to this self-promoting "journalist" Trump doesn't want anyone touching his toothbrush.

I started to read the excerpt and after a few paragraphs I was distracted by having to watch my kittehs pee-pee clump in her litter box.  It proved to be way more interesting than this drivel Wolff patched together in order to make a quick buck. 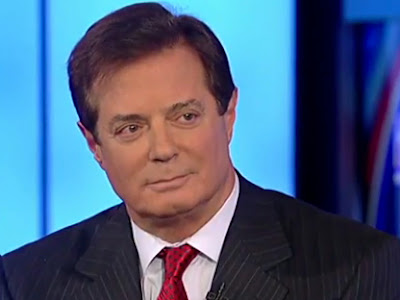 Operation complete - Manafort is pushed off the front page, along with his lawsuit.  Since I'm probably only one in about 10 million peeps that will bother to read it, I will state that after reading a few excerpts it seems to have merit.

One need not be a legal eagle beagle to know that Mueller has been running a clown show and most likely doing it outside the law.


Shortly after the indictments[against Papadopoulos and Manafort] were unsealed, the media’s spirits were suddenly boosted when the special counsel revealed that a former adviser to Trump pleaded guilty to lying to the FBI about his contacts with a Russian national during his time on the Trump campaign. Surely this was evidence of illegal “collusion,” right?

Wrong. George Papadopoulos pled guilty to a single charge of making a false statement to the FBI. He was not charged with so-called “collusion” because no such crime exists in American statutory law, except in anti-trust matters. It has no application to elections and political campaigns.

It is not a crime to talk to a Russian. Not that the media would ever understand that. They have never managed to point to a single statute that makes “colluding” with a foreign government in a political campaign a crime, likely because it does not exist in the criminal codes.

[...]Until now, no one had legal “standing” to argue in court that the appointment of Mueller was illegal. The criminal charges [against Manafort and Papadopoulos] change all that. The two defendants will be able to argue before a judge that Mueller’s appointment by Acting Attorney General Rod Rosenstein violated the special counsel law.

As I pointed out in a column last May, the law (28 CFR 600) grants legal authority to appoint a special counsel to investigate crimes. Only crimes. He has limited jurisdiction. Yet, in his order appointing Mueller as special counsel (Order No. 3915-2017), Rosenstein directed him to investigate “any links and/or coordination between the Russian government and individuals associated with the campaign of President Donald Trump.” It fails to identify any specific crimes, likely because none are applicable. read it all


Will Manafort win his suit?

I'm placing my bet on Manafort.

So forget about Trump's toothbrush, banish Bannon from your head, and soldier on comrades.

If you need something to do, you're welcome to join me by my kitteh's litter box.

WND: Subject in anti-Trump book: Author made up quote

All sorts of great Amazon deals in Sports and Fitness