lies to protect himself and his "friends."

Friends is in quotes, because people like Comey don't really have any friends.

I sat through the entire session yesterday.  Admittedly, I did not pay strict attention as I was flitting about the internet while Comey droned on about his "feelings."

He "felt" Trump may not be honest.  He "thought" he had to document his discussions with Trump to protect himself and the FBI.  He admitted to leaking his own privileged conversations with the President in order to make sure a special prosecutor would be appointed.  Problem is - the special prosecutor, Robert Mueller, has been a mentor to him and was in charge of debriefing Comey about evidence and testimony before the hearing.  Was there collusion going on during the debriefing?

He lied when he said he only leaked those notes to the New York Times after Trump tweeted that Comey had better hope there wasn't any tapes of their meeting when it was the exact opposite - Trump's tweet was in response to the leaked memos. 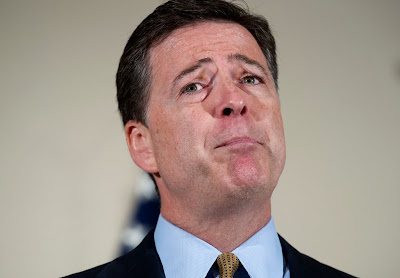 Through it all, Comey portrayed himself as the most moral, most ethical, and most righteous person who ever worked in government.  Loretta Lynch's order that he call the investigation into Clinton's email server a "matter" rather than an investigation made him "queasy", but he just shrugged and thought it was no big deal.  Really, Jimmy?  If it was not a big deal, why did it make you queasy?

While he was quite certain that Clinton had no "intent" to cause harm by using a private email server, he seems to have no such qualms about Trump's "intent."  He made it quite clear that he didn't like Trump and didn't want to serve under him.

Comey lies to protect his own image of himself as being above it all.  He natters on about only wanting to protect the American people, because if not him, who will do it?

He confirmed that an entire story printed by the New York Times about associates of Trump having multiple contacts with Russia was not true.  It's called fake news.

I've seen many headlines calling this hearing a "nothing burger" (one of the dumbest phrases ever conjured up), when it most certainly is not "nothing."

We are witnessing insiders in the DC swamp doing everything in their power to destroy the Trump presidency.  I call that treason.  The ultimate losers in this are the American people who elected someone to "drain the swamp."  As the water level is lowered the snakes and other swamp creatures are crawling about and with their last breath causing as much mayhem as possible.

There is something unseemly about a 6'8" "man" using weasel words and talking about his "feelings."  The FBI doesn't operate on feelings, but on facts.  Facts seemed to be in short supply yesterday.  Someone get that "man" a pair of pj's, please.