Obama the Classless, the mind of a liberal, blacks need understanding, and other stuff...

because we have a several day reprieve after weeks and weeks of rain and there is much to be done outside.

Fresh off his triumph of being awarded the "Profile in Courage" award, Obnoxious Barry hops on private jet to wend his merry way to Milan wherein he enjoys a 14-car entourage to his hotel so he can tell us dirt people why we need to use bicycles or walk to save the planet.

Monday at the Anti-Defamation League Conference, FBI Director James Comey said law enforcement “officers and deputies and agents” need to do a better job “understanding” the communities they serve, including “the history and journey of black America—the hopes, the dreams, the disappointments, and the pain.”

I understand that more than a few of their "hopes and dreams" were dashed because of flight delays at the Fort Lauderdale airport and they suffered from "disappointments and pain".  I guess it was part of their "journey" - or non-journey as it were.


The group of passengers who clashed with cops were angry because the last-minute disruptions meant they would miss a graduation ceremony.

A mob of irate customers began beating the counters and screaming at staff, prompting airline employees to call the police.

Shocking footage shows people shouting as they are dragged from the terminal building. Video of the mayhem HERE

Actually, not too shocking.  We're getting used to it.


Health Care and Health Insurance are not the same thing.

Here are two articles that sum up the problems with the way health care is delivered in the country:

LL, over at Virtual Mirage:

[...]The market for health insurance should look like the market for auto insurance or homeowner’s insurance: coverage you buy on your own, instead of depending on the government or your employer to buy it for you. Supplement that market with financial assistance for the poor and the chronically ill, and you’ll have achieved market-based universal coverage, along the lines of Switzerland’s health care system. Read the Rest

And the ever irascible Ann Barnhardt explains quite well how insurance actually works:  Insurance: the Abject Fraud of Covering “Pre-existing Conditions”

James Lewis does a masterful job of smacking done the elitist never Trumpers.  Good for him!

When George Will and other leading intellectuals started to rip holes in their warm comfort couches in despair at Donald Trump's long series of victories, culminating in his election to the presidency, a lot of us were scratching our heads.  What was it about winning that drove George Will, Jonah Goldberg, and Bill Kristol to despair?

It made no sense.

Their Conservative Cringe makes even less sense today, when Trump is carrying out a series of actions that we have long clamored for. Well, Mr. Will has finally identified his complaint in a WaPo opinion piece dramatically called "Trump Has a Dangerous Disability."  Read the Rest

Taking a Peek into the Mind of a Libtard


Liberalism is a mental disorder.

This morning, Fran Porretto, over at Liberty's Torch, reminded me of the five stages of grief as defined by Elisabeth Kübler-Ross.  I've been watching (from afar) the stages being played out to perfection by the few libtards in my acquaintance. 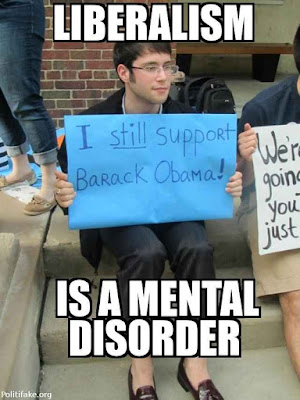 First we all witnessed (1) denial on election night along with grief that was so overwhelming that it produced displays of wailing and gnashing of teeth that no adult should do in public.  "No, no - this must be wrong.  Hillary should be elected."

Next they got (2) angry.  The women donned silly pink pussy hats and gathered together to screech and howl like banshees on steroids.  Again - in public.  The men?  Not sure the left has any men, to be honest.

After fueling their anger with a few more marches, they started (3) bargaining.  "Dear Gaia in heaven - make it go away and I'll plant a tree and never kill another dandelion."

Following all this angst they've finally reached (4) depression.  Yes, indeed.  They've been fairly quiet lately because they're too damn depressed to get out of bed.  Marriages are breaking up, suicide calls are on the upswing, and the lefty therapists are having a field day racking up hundred dollar 50 minute hours.

The question is, will they ever reach level (5) acceptance?

And therein, dear poodles, is the reason we call liberalism a mental disorder.  It manifests in a detachment from reality, anger, and finally a soul destroying state of depression.

After reading the following screed (it's wise to see what your enemy is thinking and, make no mistake, a libtard is the enemy), you will understand more clearly with whom you are dealing.

How to Stay Sane if Trump is Driving You Insane: Advice From a Therapist

It is written by Robin Chancer, who describes herself as a "behavioral specialist, sensitive social worker, immigration enthusiast, ready to laugh and cry at a moment's notice."

That description sounds like she needs more than a few hundred dollar 50 minute hours herself.

She preaches the concept of acceptance.  Will they do that?  Oh, hell noes!

Don't miss the comments, either.  There's not a lot of them, but they offer further insights.

If you don't have an Instant Pot yet, Amazon has it on sale today for $89.95.  This is the 6 quart and the model that I have.  If you have a very large family or batch cook, you may want the 8qt.  Considering the speed of cooking in the Instant Pot, the 6 qt is perfectly adequate for most people and I don't think the extra money for the 8 qt is necessarily worth it.

Some deep discounts in Men's Clothes