and it's not all good.

Nor is it necessarily all bad, either.

This is not a review of the series, but a bit of background is necessary before we get to the meat. 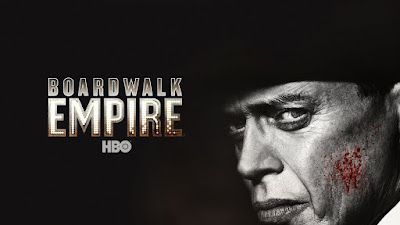 Boardwalk Empire, a crime drama set in Atlantic City, NJ during the prohibition era is a HBO series that started in 2010 and ran for 5 seasons.  I stumbled upon it reading a blog by a quite successful lady mystery writer who made mention of the show.

One of the "benefits" of having Amazon Prime is access to TV shows and movies that someone without cable didn't even know existed.  That would be me since we haven't had cable for over 20 years and rarely even rent movies.

Waving a gangster type series in front of someone who was a fan of The Godfather and The Sopranos was an immediate quest for more info.  Was it on Amazon Prime?  Why, yes - yes it is.

I fired up episode one of season one and watched it.  Hmmmm - not bad, so I soldiered on and watched episode two, and before you know it, I had consumed the entire first season (12 episodes) and am currently several episodes into season two. In two days!


Let's go from the good to the bad, shall we?

The attention to detail of the 1920's is impeccable.  The clothes, homes, and what I would call lifestyle are absolutely perfect.  Not being familiar with Atlantic City, I thought the boardwalk set was terrible and looked like a main street in Disneyland.   Incapable of not doing due diligence, I quickly looked up pics of the boardwalk in 1920 and discovered that it did look just like it was portrayed.  That led to reading many hours of research on the history of Atlantic City.

The depiction of the gangsters was historically accurate.  I devoted many years to the investigation of the 1920's gangs, so very little due diligence was necessary. Characters like Al Capone, Charles "Lucky" Luciano, Arnold Rothstein, Meyer Lansky, and Johnny Torrio are just a few of the well known organized crime people with which I've become familiar.

Many liberties were taken with the lead character, based on Enoch Nucky" Johnson, the "boss" of the Atlantic City political machine, a person I had never heard of until I did my research on Atlantic City.


It hasn't taken long to get to the bad. I had no idea that HBO and other cable networks were allowed such leeway in their depiction of the sexual act.  The nudity was really more than was necessary and quickly became boring.  However, I immediately thought of young boys having watched this. The obvious outcome will be their not being able to resist looking for even more graphic images which we know are readily available online.  Not good!

The World of Politics and What I Learned

Where The Godfather and The Soprano's were more focused on the gangsters, Boardwalk Empire is more focused on politics and the corrupt political machines and how they worked. It it was disturbingly familiar to what is going on today.

We tend to be naive when it comes to politics because we are only offered pieces of a big ugly puzzle.  We make jokes about the brother-in-law of the governor getting the construction contract for the new highway, but we really don't know how deep and treacherous the graft and corruption is.  Often referenced is the smoky backroom where deals are made.  The only difference today is the backrooms are no doubt smoke free zones

Boardwalk Empire was a reminder that politics has always been dirty, and human nature hasn't changed much since Adam and Eve first donned their fig leaves.

The machinations behind Warren G.Harding winning the Republican nomination and his subsequently becoming elected president led to even more due diligence on my part.

Other than the Teapot Dome scandal (and, of course, the salacious details of his affair with Nan Britton), Harding was never on my radar for due diligence.  He died 3 years into his term making him even less interesting to most people. His death came 22 years before I was even born.  Now think on this for a moment - for an 18 year old, who voted for the first time in the last election, Harding's death occurred 75 years before they were born, so you can be assured Harding and his scandals hold no interest for them either.  Were they even taught about the Teapot Dome scandal in school?  I doubt it.


In 1920, Tennessee was the last state needed for ratification of the national right for women to vote thus the election of Harding was due in part to the women's vote.  I might remind the women of today that the biggest roadblock for the passage of the 19th amendment was the democrat party.

The Suffragettes worked for decades for the right to vote and the history of the Suffragette Movement is long and complicated.  Later, their offspring worked for the passage of the equal rights amendment.

Women are now well represented in government and have achieved their dream of equality - they are now just a venal, corrupt, and degenerate as their fellow male politicians. Congratulations, ladies.

Have We All Been Too Naive?

Don't all of us live in some sort of bubble or another?  Are we not influenced by the way we were raised, the company we keep, the things we read?

The biggest difference between now and the 1920's is the speed at which the news travels.  Back in the 20's people relied on newspapers which were just as biased as they are now.  Stories were spun, slanted, and often bought and paid for.

Now these same stories are spun, slanted, bought and paid for, and just plain made up, and reach us in nano-seconds instead of a day or two.

Yet we trudge on with hope in our hearts, which is a gift of God, and not to be taken lightly.  We hope for righteous and good people to step into leadership roles.  We hope for a better future for our children. The only alternative is to sit in the corner, cry, and twirl our hair and that will never be an option for people of good will.

More Deals of the Day