Stop the presses: I actually agree with Bill Maher...(video)

It seems that some time in the past, Paula Deen uttered the word "nigger" (I refuse to call it the "n" word because that's just plain silly).  Her punishment?  She loses her job, her reputation, and is forced to make groveling public apologies.  Over a word?  One she reportedly said in private?

Have any of you listened to any black rap stars lately?  Thought not.  Black rap stars say "nigger" all the time.  Hop over to Facebook and see how many blacks call each other "nigger."  They also use the term "whitey" and it's not meant as a compliment to white people.

This should seriously send chills to even the most ardent libtard. Destroy a person because you object to something she said in private?  One word?  Think on this; what will be the next word, phrase, or joke that could perhaps destroy your life?  Know anyone who's lost their job for uttering "trailer trash?"  Or how about a favorite Texas approbation; "dirty leg", a term that cannot be explained - you just know one when you see one?  Teabagger?  Bitter clinger?  Uh, no, that won't happen because it's the libtards throwing those nasty little syllables out into the air. 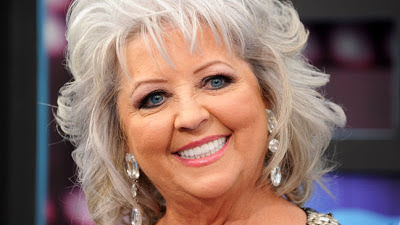 I'm not a Paula Deen fan (although I think she has very pretty hair.)  We don't have cable and I've never seen her show.  I understand she uses a lot of butter - which is a good thing, but other than that and seeing some pictures of her on magazine covers at grocery checkout, I really know very little about her.

The upside is she's 66 years old and probably has enough money stashed away to have a fine life.  But if she really loves what she's doing and wants to continue, in time she'll be picked up by another station. I wish her well.


I have no idea of who these pontificating arrogant twatfuddles are in the Maher video.  I particularily liked it when Bill Maher said:

“It’s just a word, it’s a wrong word, she’s wrong to use it, but do we always have to make people go away?” Maher asked.

The panel again disagreed, with former New York Times columnist Bob Herbert saying, “For me that word is the line…nobody should be using that word.”

I had to look up who Bob Herbert is.  Seems he's a pretty successful guy.  Now Mr. Hebert was born in March of 1945 making him 68 years old.  I wonder if we dug back far enough in his distinguished life, we could find a time when he used the word "nigger", "whitey", "wop", or "chink."  I wonder if he ever called a classmate a "spic."  I don't think I'll be betting my 5 acres of paradise on the assumption that he's never uttered a "forbidden" word.

Instead, he, from a perch of moral indignation, sits in judgement on Paula Deen agreeing that she should "go away" because she crossed some imaginary line of what he finds offensive.

It's early morning in the USA and I can smell the tolerance.