I don't think this IRS thingy is going away...

I just listened to Obama make a statement in which he expressed his "outrage."

Since Odumbo is always "being clear", allow me to be clear:

I don't believe that anyone is that stupid.

Meanwhile, while we're all embroiled in these ongoing revelations, what's going on with immigration?


"I've reviewed the Treasury Department's watchdog report and the misconduct that it uncovered is inexcusable. It's inexcusable and Americans have a right to be angry about it and I am angry about it. I will not tolerate this kind of behavior in any agency but especially in the IRS given the power that it has and the reach that it has in all of our lives. And as I said earlier, it should not matter what political stripe you're from, the fact of the matter is that the IRS has to operate with absolute integrity. The government general has to conduct itself in a way that is true to the public trust, that's especially true for the IRS. So here's what we're going to do. First, we're going to hold the responsible parties accountable. Yesterday I directed Secretary Lew to follow up on the IG audit to see how this happened and who was responsible and to make sure that we understand all of the facts. Today Secretary Lew took the first step by requesting and accepting the resignation of the acting commissioner of the IRS because given the controversy surrounding this audit, it's important to institute new leadership that can help restore confidence going forward. Second, we're going to put in place safe guards to make sure this kind of behavior can't happen again and I have directed Secretary Lew to make sure the IRS implements the IG's recommendations right away. Third, we will work with Congress as it performs its oversight roll and our administration has to make sure that we are working hand-in-hand with Congress to get this thing fixed. Congress, Democrats and Republicans owe it to the American people to treat that authority with the responsibility it deserves and in a way that doesn't smack of politics or partisan agendas because I think one thing you've seen across the board is that everybody agrees what happened in as reported in the IG report is an outrage. The good news is it's fixable and it's in everybody's best interest to fix it. I'll do everything in my power to make sure nothing like this ever happens again by holding the responsible parties accountable, by putting in place new checks and new safe guards and going forward by making sure the law is applied as it should be in a fair and impartial way and we're going to have to make sure the laws are clear so that we can have confidence that they are enforced in a fair and impartial way and that there isn't too much ambiguity when it comes to these laws. That's what I expect, that's what the American people deserve and that's what we're going to do.


Time to haul out my favorite kitteh: 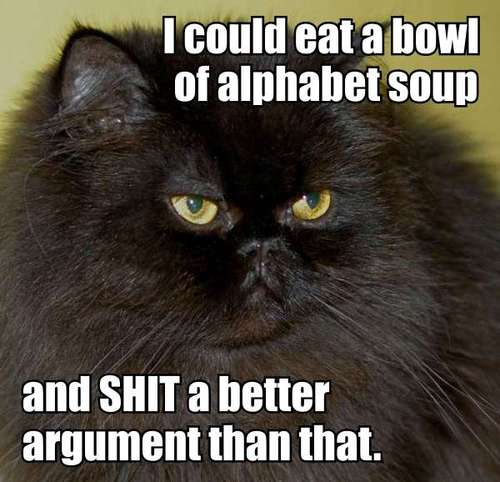