Three New Navy Ships
USS REAGAN
Seeing it next to the Arizona Memorial really puts its size into perspective... ENORMOUS! 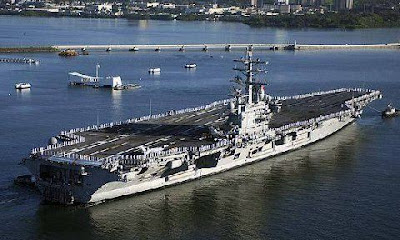 When the Bridge pipes 'Man the Rail' there is a lot of rail to man on this monster: shoulder to shoulder, around 4.5 acres.
Her displacement is about 100,000 tons with full complement.
Capability
Top speed exceeds 30 knots, powered by two nuclear reactors that can operate for more than 20 years without refueling
1. Expected to operate in the fleet for about 50 years
2. Carries over 80 combat aircraft
3. Three arresting cables can stop a 28-ton aircraft going 150 miles per hour in less than 400 feet
Size
1. Towers 20 stories above the waterline
2. 1092 feet long; nearly as long as the Empire State Building is tall
3. Flight deck covers 4.5 acres
4. 4 bronze propellers, each 21 feet across, weighing 66,200 pounds
5. 2 rudders, each 29 by 22 feet and weighing 50 tons
6. 4 high speed aircraft elevators, each over 4,000 square feet
Capacity
1. Home to about 6,000 Navy personnel
2. Carries enough food and supplies to operate for 90 days
3. 18,150 meals served daily
4. Distillation plants provide 400,000 gallons of fresh water from sea water daily, enough for 2,000 homes
5. Nearly 30,000 light fixtures and 1,325 miles of cable and wiring 1,400 telephones
6. 14,000 pillowcases and 28,000 sheets
7. Costs the Navy approximately $250,000 per day for pier side operation
8. Costs the Navy approximately $25 million per day for underway operations (Sailor's salaries included). 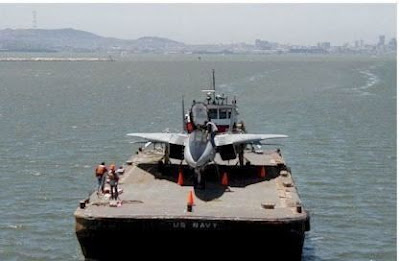 The ship is the first of its kind in the Navy and is a standing legacy to President Bill Clinton 'for his foresight in military budget cuts' and his conduct while holding the (formerly dignified) office of President.

The ship is constructed nearly entirely from recycled aluminum and is completely solar powered with a top speed of 5 knots. It boasts an arsenal comprised of one (unarmed) F14 Tomcat or one (unarmed) F18 Hornet aircraft which, although they cannot be launched on the 100 foot flight deck, form a very menacing presence.

As a standing order there are no firearms allowed on board.

This crew, like the crew aboard the USS Jimmy Carter, is specially trained to avoid conflicts and appease any and all enemies of the United States at all costs.

An onboard Type One DNC Universal Translator can send out messages of apology in any language to anyone who may find America offensive. The number of apologies are limitless and though some may seem hollow and disingenuous, the Navy advises all apologies will sound very sincere.
In times of conflict, the USS Clinton has orders to seek refuge in Canada .
*
*
USS BARACK OBAMA
*
* 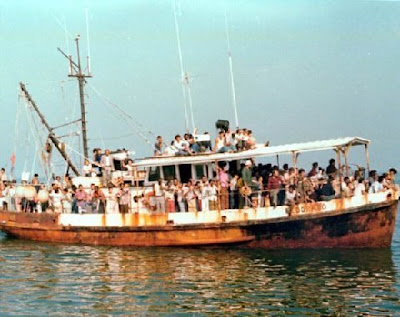 Don't ask.
This is not going to be pretty.
*
*
*
Update:
*
...and Jeff Miller, our very own Curt Jester has the information and great pictures of the USS Carter. Thanks Jeff!!
Posted by Adrienne at 6:17 PM

Email ThisBlogThis!Share to TwitterShare to FacebookShare to Pinterest
Labels: Obama

Though you have a couple of factual errors. The U.S.S. Clinton is manned entirely by chubby female interns.

The U.S.S. Obama has no crew since they were all aborted.

I once did a parody on the U.S.S. Carter

I thought this was a serious post at first.