Southam's guess and your g no uess is as good as mine - maybe.

Because my guess is pretty darn radical.

Here's the thing, if you're beating up on yourself because you're spending hours and hours pinned to your computer and not "moving on with your life", allow me to remind you we're living in unprecedented times. At least unprecedented in our lifetime.

The next few days will be intense to a degree we've never experienced.

There is no dispute that silencing Trump supporters, conservatives, and Christians, by attacking their free speech is happening. There is no doubt people are losing their jobs (probably illegally, but when has that been an issue for commie/libtards?), being shunned, and vilified.

The fake news is hard to separate from the truth.

Be alert and calm and think through whatever you read or hear.  There will be many more false flag events promoted like what happened on January 6th.  Don't fall for it.

Thank you to all the patriots who responded to be a part of my contact list with phone numbers, addresses, and email addresses. All info is kept in written form, in a safe place, and everything is deleted from my computer. Yeah, I know - it's never really "gone", but I highly doubt the CIA is going to send in forensic computer geeks to raid the computer of a little old lady in North Idaho.

I'm also considering another email service on Proton, Mailfence, or Posteo which are more secure. If you're on Gmail - get off now.

I suggest that you consider doing the same thing with those with whom you need to communicate.  Don't forget addresses. There may come a time when snail mail might have to be an option.  Even during the Civil War, snail mail still moved. It was erratic, slow, or barely existent, but it was still there.

As far as Darin's beard? It's for a movie he's making, but I still think it looks sort of okay.

In North Idaho News:
Notice the wording in the third sentence: It's not law enforcement's job to get between you, your health and your doctor. Period.
How many times have we heard the pro-death abortion cheerleaders say, "Abortion should be between a woman and her doctor?"  Hilarious to see them hoisted by their own petard. 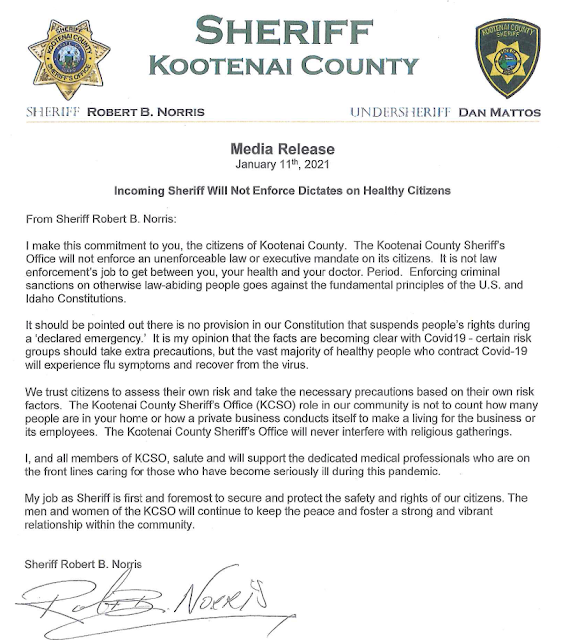